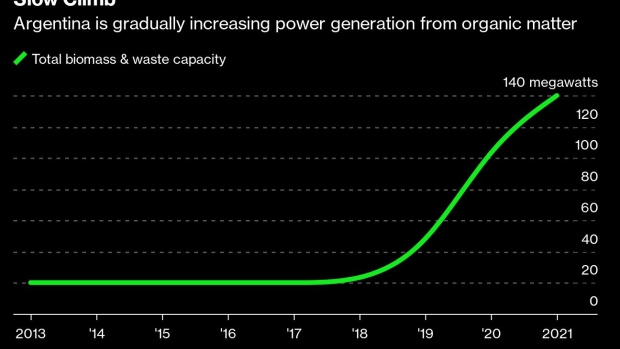 (Bloomberg) -- Despite installing a capture system that operators of the Norte III landfill outside Buenos Aires said would limit methane seeping from the dump, new satellite observations suggest releases of the potent greenhouse gas from the site haven’t diminished.

The detections highlight the challenge in curbing the climate impact of waste sites, which are responsible for about a fifth of methane generated by human activity globally. Satellite operator GHGSat Inc. said an observation in September implied as much as 38 metric tons an hour of methane was leaking at the time from Norte III, which receives roughly 85% of Buenos Aires’s trash.

When asked about the emissions, the site’s operator, Ceamse, said the amount of garbage it received over the past year, especially with Argentina’s economy emerging from a pandemic slump, was creating extra methane that offsets what’s being captured and piped to a 5-megawatt power plant. It also said it’s waiting for the government to approve a request to expand the capture system to produce about 13 megawatts.

Ceamse had said that methane plumes would shrink substantially after it turned on the power plant more than a year ago, but sustained reductions don’t appear to have materialized.

Marcelo Rosso, who’s in charge of environmental control for Ceamse, walked back statements from around this time last year when he said releases of the greenhouse gas were poised to drop. “If emissions are roughly the same as last year, when you consider all the extra waste we deposited, that means we’re doing OK,” he said.

The Norte III landfill is recognized as a global methane hotspot and it was among waste sites studied by scientists at SRON Netherlands Institute for Space Research in an August paper.

Read more: The Trash Mountains of South Asia That Threaten the Climate

Methane is the primary component of natural gas. It’s also generated at dumps when organic materials like food scraps break down in the absence of oxygen. Constraining releases of the intense greenhouse gas from waste sites is crucial if the world is to avoid the worst of climate change. More than 120 countries, including Argentina, have joined the Global Methane Pledge, which aims to cut emissions from all methane sources by 30% by the end of this decade.

Bloomberg News has reported extensively on methane spewing from landfills, including sites in India, Pakistan, Jordan and Canada.

Read more: The Cheap and Easy Climate Fix That Can Cool the Planet Fast

GHGSat Sales Director Brody Wight said the company’s satellites routinely observe methane leaking from the Norte III landfill. In its observations from September the Canada-based emissions monitoring company estimated that Norte III was spewing between 18 and 38 metric tons of methane an hour.

Separating and composting organic material before it enters a landfill helps curb future emissions. At Norte III, Ceamse fishes out some food waste to compost. Aerating existing trash piles, or connecting them to gas capture systems, can reduce emissions from old sites.