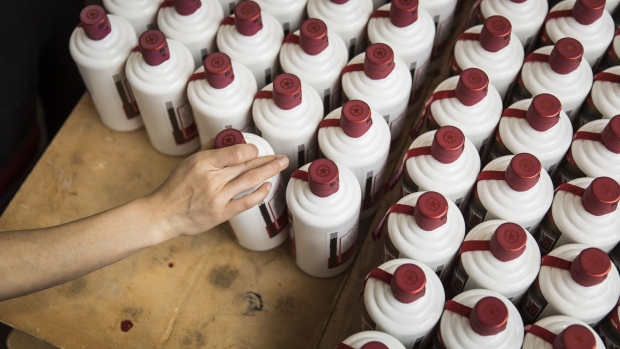 An employee arranges bottles of Moutai baijiu at the Kweichow Moutai Co. factory in the town of Maotai in Renhuai, Guizhou province, China, on Thursday, Dec. 14, 2017. Moutai baijiu's fiery flavor and potential to appreciate in price is driving blistering demand. That in turn has pushed its market value to more than $145 billion, well past British whisky giant Diageo Plc. Photographer: Qilai Shen/Bloomberg , Bloomberg

The most popular stock trade in China is unraveling, tarnishing the reputations of some of the country’s most successful money managers and undermining the outlook for the world’s second-largest equity market.

Until three weeks ago, buying the nation’s beloved liquor maker Kweichow Moutai Co. was a surefire way for the US$3 trillion mutual fund industry to mint money and attract bumper inflows. The stock soared 30 per cent year-to-date through its Feb. 10 record, after gaining almost 70 per cent in 2020 -- and doubling in the year before that.

Many funds, flush with a record amount of cash, didn’t have a choice if they wanted to keep their clients and attract new investors. Buying Moutai was the simplest and most effective way to top rankings -- until it wasn’t. The stock began tumbling after the Lunar New Year break, and kept falling. It’s now down 22 per cent since its peak, including a drop of as much as 6 per cent Thursday, and has lost more than US$111 billion in value.

One of the most high-profile casualties is E Fund Management Co.’s Zhang Kun, the first in China to oversee 100 billion yuan (US$15 billion). Zhang’s E Fund Blue Chip Selected Mixed Fund is down 12 per cent in 10 trading days after returning 95 per cent last year largely due to a big bet on baijiu, the Chinese white spirit. The fund had 9.6 per cent of its assets invested in Moutai as of December. Another fund run by Zhang has lost 23 per cent. Zhang didn’t immediately reply to a request for comment.

The fund manager has received “verbal abuse” in recent weeks by investors who were previously fans, according to a report Wednesday in China’s state tabloid Global Times. He was known as “Prince Charming” or “Brother Kun” among his investors, who now refer to him on social media as “Kun Gou” or “Kun the dog” -- an offensive term in Chinese.

Other copycat money managers will be feeling the pain: recent data showed two-thirds of mutual fund assets were invested in only 100 stocks, while the top 400 stocks lured 93 per cent of total funds. Although China’s onshore market contains more than 4,000 stocks, Moutai is by far the largest with a market value of about US$390 billion.

Moutai accounts for 27 per cent of the loss in the FTSE China A50 Index of the nation’s largest companies since Feb. 10. When added together with fellow spirit makers Wuliangye Yibin Co. and Luzhou Laojiao Co., the three comprise more than half of the gauge’s decline.

Concern had been growing about the stretched valuations of Moutai and its peers, especially as gains accelerated. A gauge tracking consumer staples, including liquor makers, traded at a record 36 times projected 12-month earnings in February.

To be sure, the company’s shares have faced plenty of risks in the past. The stock tumbled about 8 per cent in a single day in July after the People’s Daily criticized the high price of the company’s liquor. In 2017, Xinhua News Agency said the stock was rising too fast, triggering a selloff. Back in 2013, the stock plunged when Xi Jinping came to power and clamped down on lavish spending by party cadres.

But this time around, authorities have grown increasingly concerned about risks to the financial system posed by excess liquidity. On Tuesday, China’s top banking regulator jolted markets with a warning about the need to reduce leverage amid the rising risk of bubbles globally and in the local property sector. With Moutai being the best-known proxy for liquidity-fueled bets and momentum, fund managers will likely need to find a new strategy to protect their returns.

--With assistance from Amanda Wang, Mengchen Lu and David Watkins.