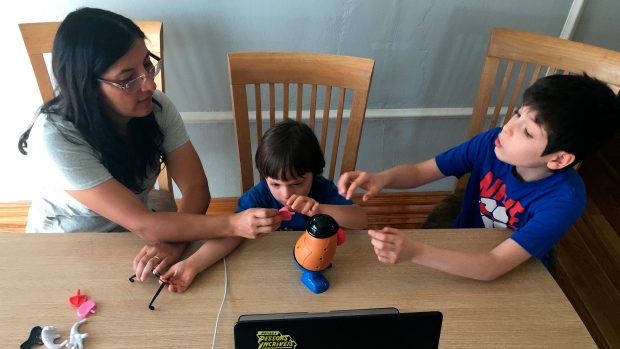 In this May 21, 2020, photo, Pablo Prengaman, center, practices recognizing and verbalizing body parts while building a Mr. Potato Head with the help of mother, Lorena Prengaman, and brother Lucas Prengaman, during a speech therapy session via Zoom in Phoenix. , The Canadian Press

Hasbro Inc. is dropping “mister” from the Mr. Potato Head brand to make the popular toy line gender neutral and appeal to a broader base of consumers.

The series, featuring a plastic potato with removable parts like eyeglasses, a mustache, nose and mouth, will also be more sustainably made, the company said Thursday in a presentation to investors. Last year, Hasbro said the products would be made from “plant-based plastic” and have less plastic packaging.

Toy companies have been seeking to keep up with changing consumer preferences. Mattel Inc., Hasbro’s largest U.S. competitor, has seen sales of Barbie dolls soar after adding a wider array of skin tones and body types. In the presentation, Hasbro said toys that reflect consumers’ values are particularly important now.

Mr. Potato Head dolls were first sold in 1952, and have long been a top seller for the Pawtucket, Rhode Island-based toy giant. The line has been altered to keep up with the times before -- a pipe was dropped in 1987 over tobacco concerns. In 1992, the Potato Head backstory was rewritten to embrace a more active lifestyle and lose references to “couch potatoes,” according to Hasbro.