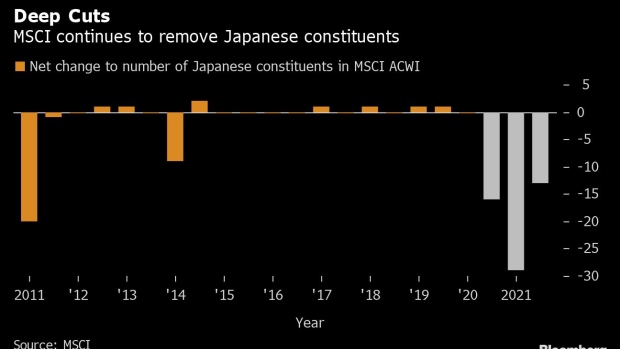 (Bloomberg) -- Japan’s weighting in MSCI Inc.’s global equity benchmark is crumbling as the index provider continues to strike Japanese stocks off its gauges, threatening a further drop in foreign interest in the world’s third-largest equity market.

The country’s equities now account for about 5.65% of the MSCI ACWI Index, down from 7.35% in November 2019, according to calculations by Mizuho Securities Co. Earlier this month, 15 Japanese names were cut from the MSCI Asia Pacific Index in a regular review, while only two new constituents were added.

That’s the third time in a row MSCI has dropped more than 10 Japanese names from its Asian benchmark. MSCI removed a net 29 names in May, and 16 in November 2020. The cuts are another hit for Japan’s chronically rangebound stocks, as global investors continue to lose interest amid worsening underperformance.

“It’s like a body blow to the market,” Hiroshi Matsumoto, head of Japan investment at Pictet Asset Management, said of the cuts. “It’s worrying that Japan’s presence in the global market may be reduced, while trading volumes could drop.”

A total of $16.3 trillion of assets under management were benchmarked to MSCI indexes globally as of Sept. 30, according to the index provider. The latest reshuffle, which takes effect Tuesday, is likely to result in an outflow of about 220 billion yen ($1.9 billion) from Japanese equities, Daiwa Securities analyst Junichi Hashimoto estimates.

Japan’s underperformance is one reason for MSCI’s cutting of Japanese names. The S&P 500 is up 24% so far this year versus an 8% advance for the Topix, pushing a ratio of the U.S. gauge to the Japanese benchmark to all-time high levels.

Prime Minister Fumio Kishida unveiled a nearly $500 billion stimulus package this month aimed at shoring up a sputtering economy and launching his new vision of capitalism. While Kishida has emphasized that the economy must get back on track before any tightening of the nation’s purse strings, the stimulus has done little to excite investors thus far.

“Japan has been slow in recovering from the pandemic,” Daiwa’s Hashimoto said. Unless Japan is able to implement economic measures effectively, Hashimoto said he sees “no end” to the reduction of the country’s MSCI weighting.