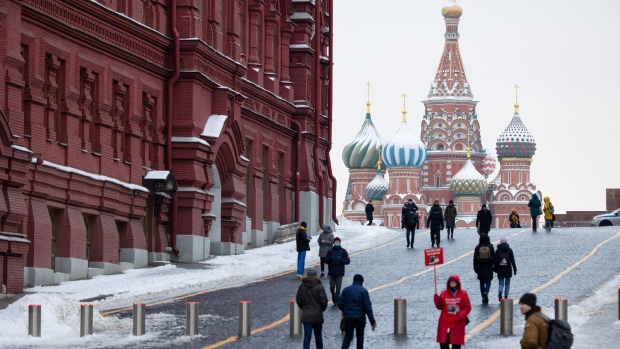 (Bloomberg) -- MSCI Inc. is eliminating Russian equities from the firm’s widely-tracked emerging-markets index, cutting the stocks off from a large segment of the investment-fund industry as penalties mount over Russia’s invasion of Ukraine.

“During the consultation, MSCI received feedback from a large number of global market participants, including asset owners, asset managers, broker dealers, and exchanges with an overwhelming majority confirming that the Russian equity market is currently uninvestable and that Russian securities should be removed from the MSCI Emerging Markets Indexes,” MSCI said in a statement on Wednesday.

The decision will be implemented in one step across all MSCI Indexes as of the close of March 9, according to the statement.

The index provider made the move after Russia introduced capital controls and banned foreigners from selling securities locally, effectively shutting the exit for investors. According to one estimate, the change could cause an exodus of up to $32 billion in active and passive funds once they’re able to trade the stocks again. The problem is it’s unclear who would be on the other side of the trades, given the sanctions against Russia.

While Russia has kept its local stock market closed since Monday, foreign-listed shares in Russian companies plunged this week. In an effort to support its market, the country announced Tuesday that it will deploy up to $10 billion from its sovereign wealth fund to buy up local equities.

Russia is now what MSCI calls a “Standalone Market.” MSCI Standalone Market Indexes are not included in the MSCI Emerging Markets Index or the MSCI Frontier Markets Index, which means that they miss out on billions of investment dollars that come through passive funds tracking those indexes. Countries currently in the Standalone category include Panama, Lebanon, Palestine, Botswana and Zimbabwe.

Downgrades to Standalone status are rare. The last time MSCI made such a reclassification was for Argentinian equities in 2021, when it cited the severity of capital controls in the country.