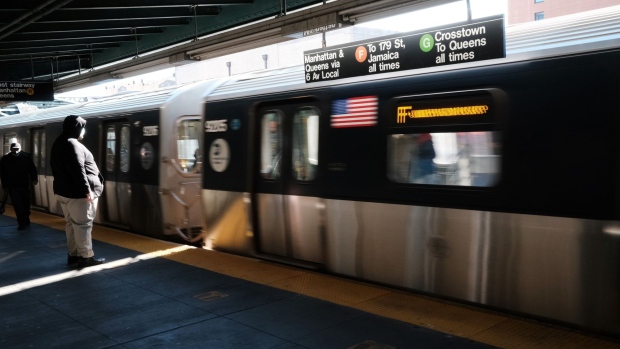 NEW YORK, NEW YORK - NOVEMBER 18: A subway arrives at a Brooklyn station on November 18, 2020 in New York City. In a bid to save $1.2 billion, the Metropolitan Transportation Authority (MTA) announced its budget for the upcoming year which includes cutting as much as 40% of service on subways and buses, and 50% on commuter rail lines. The MTA, which runs the largest public transit service in the nation, says the cuts are necessary because they have so far been denied $12 billion in federal funds. (Photo by Spencer Platt/Getty Images) , Photographer: Spencer Platt/Getty Images North America

(Bloomberg Opinion) -- Ever since the Federal Reserve unveiled its Municipal Liquidity Facility in April, it was blasted by myself and others for being too restrictive and demanding onerous terms for strapped states and cities to borrow money for the coming few years. It was so seldom used that Treasury Secretary Steven Mnuchin saw no reason to keep it open past the end of the year.

So it says a lot about the state of the Metropolitan Transportation Authority’s finances that the agency rushed to max out its credit line with the central bank before the MLF was shut down. It borrowed $2.9 billion last week, which would have easily been one of 2020’s largest municipal-bond deals if it had gone through the public market. When stacked on top of the $450.7 million it placed with the Fed in August, the MTA is at the debt limit set by the facility — 20% of gross revenue in fiscal year 2019 — almost to the last dollar.

Looking back on 2020, the unprecedented regional shutdowns because of the Covid-19 pandemic didn’t bring about the doomsday scenario for the finances of states, counties and cities — at least not yet. The municipal-bond default rate this year is slightly more than 1%, with most involving continuing-care retirement communities, hospitals and industrial developments rather than high-profile failures akin to Jefferson County, Alabama; Stockton and San Bernardino, California; or Detroit. The trailing 12-month default rate in speculative-grade corporate bonds, by contrast, is five to six times higher.

It’s almost 10 years to the day since banking analyst Meredith Whitney erroneously warned of “hundreds of billions of dollars” of municipal-bond defaults in the coming 12 months, causing a small panic in the $3.9 trillion market. In May, I wrote that munis had shaken off hyperbole about their demise time and again over the past decade because, in many ways, the market is almost too disparate to fail on a large scale. Even as stay-at-home orders and social distancing presented a never-before-seen threat to colleges and universities, museums, sports arenas and regional airports, most have found a way to stave off collapse yet again.

By contrast, the biggest problem for the MTA might very well be its size. In 2019, more people took MTA transportation than the next 11 largest U.S. transit agencies combined. It is the beating heart of the New York City metropolitan area, which on its own accounts for almost 10% of U.S. gross domestic product. The agency depends on a vibrant Big Apple, with people shuffling from brunch in Brooklyn to Broadway in Manhattan, or to a Yankees game in the Bronx or a Mets game in Queens. But even more crucially, it needs daily commuters into offices downtown or in midtown. And that hasn’t returned to normal in any meaningful way. Year-over-year ridership is down 71%, to about 1.8 million riders on a given weekday, and while the number was showing gradual signs of improvement since April, it has since plateaued.

There’s simply no way for the MTA to be as nimble as a regional airport or a small college campus. The agency hasn’t been shy about warning what’s at stake without getting its desired $12 billion of federal aid: Its leaders say they’ll have to cut subway and bus service by 40%, reduce commuter rail service by half, increase fares and tolls and eliminate 9,300 jobs. For many New Yorkers who have stood by the city through the pandemic, the idea of emerging from the Covid-19 era only to confront even more crowded subway cars and potential service disruptions is demoralizing.

Absent a huge injection of federal funds, the MTA’s options are limited. The agency had more than $45.5 billion of debt as of Nov. 4, even before last week’s borrowing from the Fed’s facility, and its forecast is for a $16.2 billion deficit through 2024. As I wrote in June, the MTA is legally barred from filing for bankruptcy, and the state has pledged not to change the law as long as any transportation revenue bonds are outstanding.

For those who might be wondering, it’s also almost certainly not possible for the MTA to simply walk away from its $3.35 billion in notes sold to the MLF and have the Fed and Treasury foot the bill without triggering a cascading effect on its entire debt structure, according to Matt Fabian at Municipal Market Analytics. As Richard Ravitch, a former MTA chairman, told me in September, the agency is entirely at the mercy of Washington lawmakers to strike a fiscal aid deal.

One reason for optimism might be the Democratic supermajority in the New York state Senate. In an interview last week on “The Brian Lehrer Show,” John Samuelsen, president of the Transport Workers Union, made his pitch for taxing stock trades and imposing a $3 surcharge on packages ordered online for delivery in New York City, which can then be used to shore up the MTA’s finances. That effectively amounts to swiping a subway card each time an item is sent to your door. “Our early outreach has been nothing but positive,” Samuelsen said. “We haven't run into any interference at all, any negativity at all in Albany.”

When individuals and companies alike are questioning the value proposition of big cities, further tax increases carry their own set of risks. Fitch Ratings downgraded $38 billion of New York City’s general-obligation bonds last week, citing an “expectation that the impact of the coronavirus and related containment measures will have a longer-lasting impact on New York’s economic growth than most other parts of the country.” A day earlier, S&P Global Ratings dropped the city’s outlook to negative.

Of course, New York bounced back from both the Sept. 11 terrorists attacks and the 2008 global financial crisis. But it did so with the help of its resilient transit system. From June 2008 to June 2009, the final month of the U.S. recession and a period in which the state’s unemployment rate jumped from 5.2% to 8.4%, the drop in ridership on buses was just 1.8%, and on subways it was a mere 1.3%, according to state data. By early 2010, year-over-year subway ridership was on the rise as the city sprung back to life with an improving job market.

Samuelsen, a nonvoting member of the MTA board, says the agency can’t count on the same return to normal this time around given the growing comfort around working from home. “That’s one of the biggest problems that we face, the estimates going forward, that even post-pandemic ridership is only going to be at like 70% or 80% of what it was prior to the pandemic,” he said. If the worst-case scenario comes to pass and it has to slash subway and bus service, it will only make New Yorkers coming out from under the shadow of a pandemic even less likely to pack together in tight spaces as they once did.

In a perfect world, the federal government would realize the importance of New York City’s economy and funnel money to the MTA so it can at least maintain current levels of service and ideally make much-needed capital improvements to ensure trains run on time for decades to come. It’s not a certainty that aid will materialize even one more time, and no one should expect support to be automatic, even if that’s good policy.

For many of us, and for most municipal borrowers, 2021 represents a light at the end of the Covid-19 tunnel. The MTA, on the other hand, still has many more challenging stops to go.