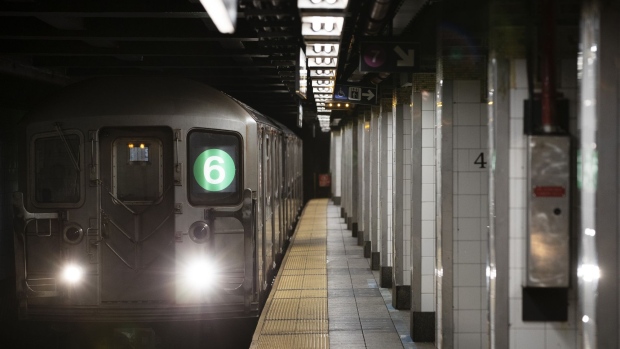 A subway train arrives at a station in New York, U.S., on Thursday, Dec. 10, 2020. New York City had its credit rating cut by Fitch Ratings because of the impact the coronavirus pandemic is having on the city's economy. , Photographer: Victor J. Blue/Bloomberg

(Bloomberg) -- New York’s Metropolitan Transportation Authority will make about 95% of its subway stations accessible to people with disabilities by 2055, in a settlement for class-action lawsuits that had pushed the mass-transit provider to speed up its updates for the system.

The MTA has agreed to add elevators and ramps to subway stations and is committing to maintaining the same level of spending for accessibility projects in future years as it has in its current capital program, Janno Lieber, the MTA’s chief executive officer, said on Wednesday. That four-year spending plan includes $5.2 billion for accessibility upgrades across the subway’s 472 stations and the Metro North Railroad, which connects the city to its northern suburbs, and the Long Island Railroad.

“We need to make the system truly accessible not only for our disabled riders, but also for older people with mobility issues,” Lieber said during a discussion with Citizens Union, a non-profit group that promotes accountability and transparency in government.

About a quarter of the MTA’s subway stations offer some form of accessibility, said Joe Rappaport, executive director of Brooklyn Center for Independence of the Disabled. The non-profit group is a plaintiff in both of the class-action lawsuits that seek to make the nation’s largest mass-transit system more inclusive.

“Right now, hundreds of thousands of New Yorkers are shut out of the fastest and best way to get around town, the subway,” Rappaport said in a telephone interview. “This opens the door to access and full participation in the life of the city.”

“We are making a commitment that is binding on future capital programs, future governors, future legislators -- and most importantly future MTAs -- to continue to invest in ADA accessibility at the same level, percentage wise, that we have been investing in this program,” Lieber told reporters after the Citizens Union event.