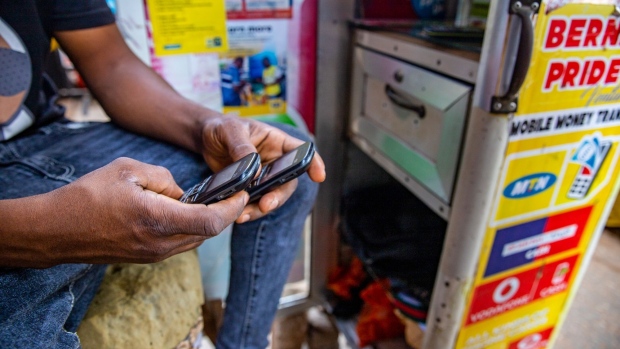 A vendor performs a mobile money transaction on a street-side kiosk in Accra, Ghana, on Tuesday, April 22, 2021. MTN Group Ltd. values its mobile-money arm at about $5 billion and will consider a listing of the division, joining African wireless carriers trying to monetize a service that is particularly popular on the continent. Photographer: Nipah Dennis/Bloomberg , Bloomberg

(Bloomberg) -- MTN Group Ltd. recently made a takeover approach for Telkom SA SOC in a deal that would’ve combined South Africa’s second and third largest telecommunications operators, according to people familiar with the matter.

Telkom has so far shown no interest in a sale, said the people, who asked to remain private as the talks are confidential. It remains unclear whether the larger rival will continue its pursuit, the people said.

“There is no deal on the table in relation to this matter,” MTN said in a statement after Bloomberg inquiries, declining further comment. A representative for Telkom didn’t immediately comment.

Following a multi-year asset-disposal program, MTN is flush with cash and looking to build on its core business. A combination with Telkom, which has a market value of $1.9 billion, would help close the gap with crosstown rival Vodacom Group Ltd. MTN’s shares have risen more than 177% this year, valuing it at about 314.7 billion rand ($21 billion).

Last week, the two parties agreed on a multi-year roaming agreement, where Telkom uses MTN’s network. There are also certain alignment in their company strategy as MTN is busy with a sale-and-leaseback deal of its South African towers, and Telkom is separating its towers business to prepare it for a possible listing of the unit.

With over 40% owned by the state, Telkom controls South Africa’s largest landline network and also sells mobile-phone packages among other services. Telkom’s other large shareholder is state-owned pension fund manager the Public Investment Corporation that holds 14% of the company, according to Bloomberg data. For a deal to ever get the go-ahead, there would have to be government support and a number of competition issues would have to be worked on, said the people.

Johannesburg-based MTN has been paying debt at a rapid rate as it disposes of non-core assets, that also includes the phased sell-down of a stake it holds in recently listed IHS Towers, the sale-and-leaseback of its South African towers and exiting certain Middle Eastern operations.

MTN is Africa’s biggest mobile phone company with about 272 million subscribers, according to its website.