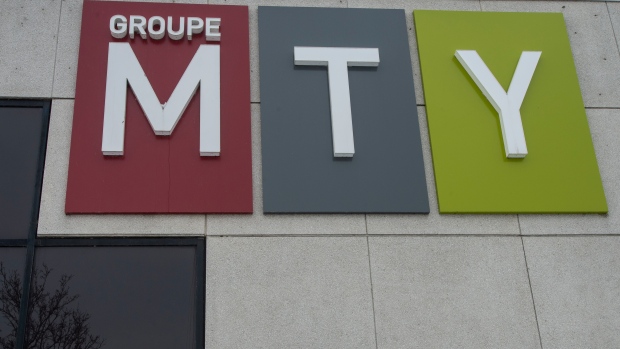 The Groupe MTY offices are seen Thursday, January 23, 2020 in Montreal. , The Canadian Press

MONTREAL — MTY Food Group Inc. reported a fourth-quarter profit of $20.7 million, up from $13.2 million in the same quarter a year earlier, as it said allegations by an employee that had delayed the release of its quarterly results are baseless.

The company says it cannot give details regarding the allegations, but that after taking the additional time to compile and review the information that the matters are all topics that MTY had evaluated and dealt with in the past.

The owner of brands such as Thai Express, Tiki-Ming, Tutti Frutti and Valentine says the profit amounted to 83 cents per share for the quarter ended Nov. 30, up from 53 cents per share a year earlier.

System sales for the quarter totalled $1.02 billion, up from $706.4 million, boosted by the acquisition of the Papa Murphy's chain which sells pizzas for customers to bake at home.

Same-store sales increased by 1.5 per cent compared to the same period last year.

MTY Group franchises and operates fast food and casual restaurants under more than 80 different banners in Canada, the United States and around the world.