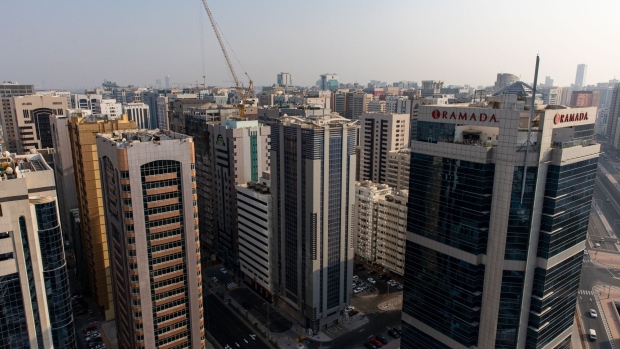 Commercial and residential properties in the Al Zahiyah neighbourhood of Abu Dhabi, United Arab Emirates, on Wednesday, Oct. 2, 2019. Abu Dhabi sold $10 billion of bonds in a three-part deal in its first international offering in two years as it takes advantage of relatively low borrowing costs. , Bloomberg

(Bloomberg) -- Mubadala Capital, the investment arm of the Abu Dhabi sovereign wealth fund, is seeking to double the assets it manages for third-party investors.

“One of the things you don’t often hear in the same sentence is sovereign wealth funds managing third-party capital,” Mubadala Investment Co.’s deputy Chief Executive Officer Waleed Al Muhairi said at a conference in the U.A.E. capital. “We are raising our third fund as Mubadala Capital. We have 17 LPs, all of them are institutions.”

The unit, which currently manages $25 billion of its own and external capital, plans to boost that amount to $40 billion “over the medium-term horizon,” Al Muhairi said. Of that, 15% -- or about $6 billion -- is expected to come from other institutional investors, almost doubling the $3.4 billion of third-party capital it currently manages.

Mubadala Investment is part of Abu Dhabi’s efforts to diversify its economy by turning oil revenue into profitable investments while also attracting expertise and jobs. The firm merged with International Petroleum Investment Co. in 2017 and absorbed Abu Dhabi Investment Council last year. It now manages about $229 billion in assets.

To contact the reporter on this story: Mahmoud Habboush in Abu Dhabi at mhabboush@bloomberg.net

To contact the editors responsible for this story: Stefania Bianchi at sbianchi10@bloomberg.net, Claudia Maedler