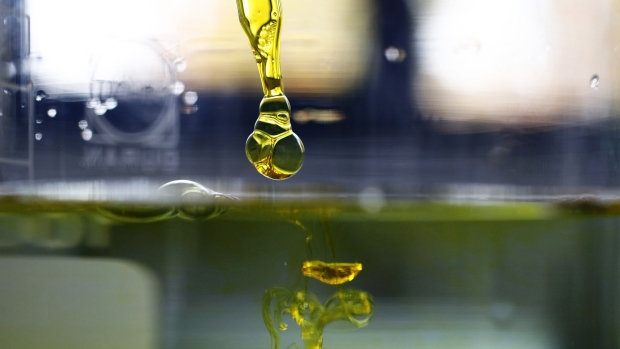 A sample of water-soluble full spectrum cannabidiol (CBD) oil is dropped into water inside the laboratory facility in Switzerland. , Bloomberg

Nearly 7 per cent of Americans are already using cannabidiol (CBD), placing the potential market opportunity for the much-hyped cannabis compound at $16 billion by 2025, according to a new analysis by Cowen & Co.

Cowen’s January consumer survey of approximately 2,500 adults found 6.9 per cent of respondents use CBD as a supplement. “This initial response piqued our interest considerably, as it was much higher than we would have suspected,” and compared to 4.2 per cent who reported use of Juul Labs Inc.’s e-cigarette devices and 19.6 per cent who consider themselves current tobacco users, analyst Vivien Azer said in a note.

Based on this surprising level of consumer awareness, Cowen “conservatively” sees CBD use growing to 10 per cent of U.S. adults or 25 million consumers by 2025, implying a US$16 billion market opportunity, Azer said.

Although CBD is promoted as an effective treatment for everything from arthritis to insomnia, the only clinically proven remedy is as a treatment for two rare forms of childhood epilepsy.

The U.S. farm bill, passed in December, makes hemp-derived CBD legal under certain circumstances. But the Food and Drug Administration has said it’s illegal to market CBD products as dietary supplements, and any CBD product marketed as having therapeutic benefits must be approved for its intended use before it’s introduced into interstate commerce.

Regulators have been cracking down on CBD products in some jurisdictions. Earlier this month, New York City health officials ordered bakeries and restaurants to stop adding it to beverages and food, while Maine and Ohio have also curbed sales of the compound.

The Cowen survey found that CBD use is highest among consumers aged 18 to 34. Tinctures (liquid extracts) accounted for the biggest chunk of the market at 44 per cent, followed by topicals at 26 per cent, capsules at 22 per cent and beverages at 19 per cent.