Should not overestimate impact of reopening as 'fear factor' remains: CIBC’s Tal

The province of nearly 15 million people is moving into the final stage of its three-part reopening plan as COVID-19 infections continue to drop. But it’s keeping restrictions on Toronto and some other areas of the province, including the regions that border Detroit and western New York. That means services such as indoor dining and movie theaters will remain closed in those areas. 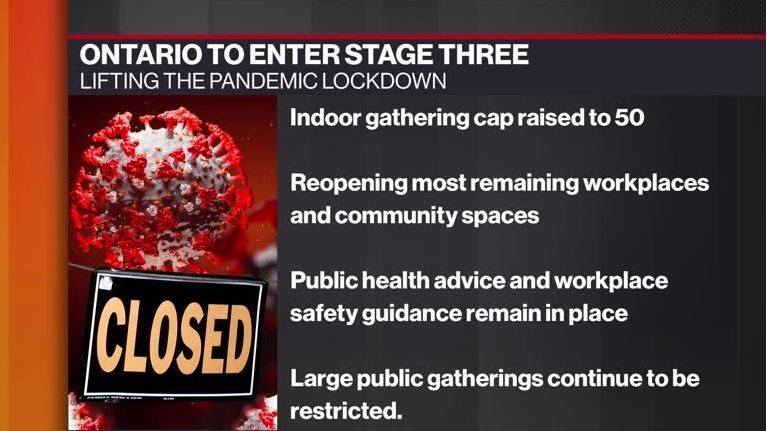 Toronto’s reopening will “hopefully be sooner than later,” Ford said, adding the government expects more regions will enter the third stage next week. Toronto, which reported 14,777 cases and 1,117 fatalities due to the coronavirus as of July 9, was also delayed moving from stage one to stage two.

Ontario has been one of Canada’s COVID-19 hot spots, though the situation has improved significantly since May. As of Monday, the province had 36,839 confirmed cases of the virus, more than a third of Canada’s cases. More than 32,600 people have recovered.

The move to open up casinos and cinemas in some parts of the province, albeit with limits on crowds, helped move shares of Great Canadian Gaming Corp. as much as 6.6 per cent to the highest level since June 26. Casinos won’t be allowed to have table games. Cineplex Inc., Canada’s dominant chain of movie theaters, initially climbed on the announcement but then erased gains and was down 0.7 per cent at 2:55 p.m. 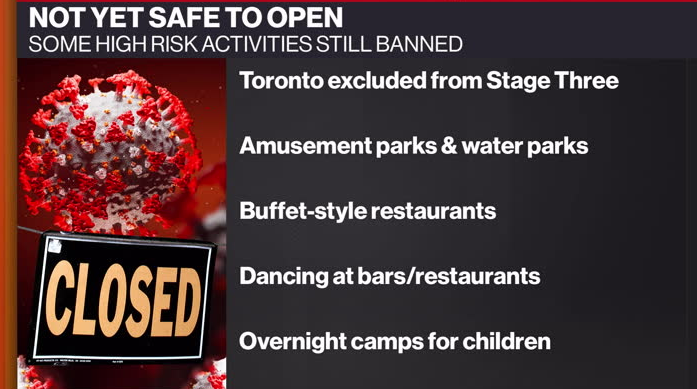 Activities such as amusement and water parks, saunas and buffet-style restaurants are still considered high-risk and are not yet safe to reopen anywhere in the province, the government said.

Based on the advice of the Chief Medical Officer of Health and other health experts, indoor gathering limits will be increased to 50 while outdoor meetings can have as many as 100 people, from 10 currently, in parts of the province that are going into stage three. Physical distancing remains a requirement for all people who are not from the same household or social circle, Ford said.

In the second stage of the reopening plan, more than 90 per cent of economic activity was allowed to resume, the province said, which resulted in employment increasing by 377,900 net new jobs in June, including 66,200 jobs in the manufacturing sector. When a region moves into stage three, “almost 99 per cent” of the local economy will be able to reopen, according to Ford.

A key part of getting people back to work is making sure parents have childcare support, Ford said.

“I want to see every child in Ontario back to school full time this September. This is what we’re working towards with the support of our medical officer of health and our local school boards.”