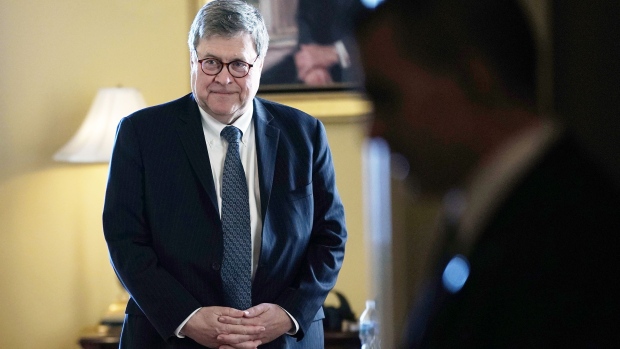 (Bloomberg) -- William Barr will be at the witness table but Robert Mueller will be the prime topic as the Senate Judiciary Committee considers President Donald Trump’s nominee for attorney general.

Barr, who Trump nominated in December to run the Justice Department, has told senators privately that he’ll let Mueller complete the Russia investigation that the president regularly denounces as a “witch hunt.” But Democrats, and perhaps some Republicans, will press Barr because he’s stopped short of promising he’ll be completely hands-off or assuring them that he’ll provide Special Counsel Mueller’s findings to Congress and the public.

The nominee needs to give “ironclad, rock-bottom assurances in terms of his independence and his willingness to step back and let Mueller finish his job,” Dick Durbin of Illinois, the Senate’s No. 2 Democrat and a member of the committee, said Sunday on ABC’s “This Week.”

Republicans have mostly voiced support for Barr, a corporate lawyer who served as attorney general once before, during President George H.W. Bush’s administration in the early 1990s.

Republican Senator Lindsey Graham of South Carolina, the Judiciary panel’s new chairman, said on “Fox News Sunday” that he’s “very comfortable” with the answers that Barr gave him in a one-on-one meeting when asked questions such as “Do you see any reason to fire Mr. Mueller, based on what you know now, for cause?” and “Will you make sure he can finish his job?”

GOP support makes Barr’s confirmation likely. With the party’s 53 seats in the Senate, four Republicans would have to join all Democrats to block him.

A Republican to watch: Senator Ben Sasse of Nebraska, a committee member, who’s said he would support only an attorney general pick who would stand by Mueller.

Barr, 68, would take over the embattled Justice Department at a pivotal time. Mueller’s investigation appears to be nearing an end while other major issues are heating up, such as a likely barrage of subpoenas from Democrats who now control the House, and litigation if Trump declares a national emergency along the border with Mexico.

“He will bring a calming influence to the leadership of the department and that will be good both for the administration and the career people,” said Terwilliger, who’s now a lawyer at McGuireWoods LLP in Washington.

Trump ousted his first attorney general, Jeff Sessions, the day after the November election following months of publicly ridiculing the former Alabama senator for recusing himself from the continuing probe into Russia’s interference in the 2016 election, whether anyone close to Trump colluded in the meddling, and whether the president sought to obstruct justice.

Barr will be pressed in the hearing to explain the broad interpretation of presidential powers he asserted in an unsolicited letter to the Justice Department in June -- including the assertion that Mueller’s inquiry into whether Trump obstructed justice is “fatally misconceived.”

Senator Chris Coons, a Delaware Democrat who’s on the Judiciary Committee, said on “Fox News Sunday” that he’s keeping an open mind on the nominee but wants Barr to pledge that he’ll seek a finding by the Justice Department’s ethics officer about whether he should recuse himself from overseeing Mueller because of “some of the opinions he’s expressed.”

At the same time, Barr is unlikely to offer to promise that Mueller would have total freedom to do as he wishes. That position would probably have Trump tweeting his regrets about nominating him.

Republicans are likely to emphasize that Barr and Mueller are longtime colleagues and friends. Graham said last week that their wives attend Bible study together, and that Mueller attended the weddings of two of Barr’s daughters. They’ll also say Barr established a track record of integrity in his previous stint as the nation’s No. 1 law enforcement officer.

After his government service, Barr spent 14 years in senior leadership positions at Verizon Communications Inc. and a predecessor, GTE Corp., before serving as a director at companies including Time Warner Inc. and hedge-fund firm Och-Ziff Capital Management Group.

His history of assailing government regulation and corporate enforcement suggests he may take a softer stance in policing mergers and pursuing allegations of corporate wrongdoing. Democrats may press him on that too.

The fault lines for Barr’s confirmation -- and his strategy for navigating them -- started to come into focus during his meetings with senators last week.

While Democrats said they were somewhat encouraged by their one-on-one meetings with Barr, Dianne Feinstein of California, the committee’s top Democrat, has said she wants to hear him pledge to protect Mueller at the hearings.

“That means no interference, no budgetary control, no stoppage, nothing,” she said. “And that is only going to get answered well in public.”

Whitaker openly criticized Mueller’s investigation as a cable news commentator before joining the Justice Department as Sessions’s chief of staff in 2017, and he cleared himself to oversee the Russia probe even though a department ethics official said a formal review probably would recommend that he recuse himself.

--With assistance from Ben Brody and Laura Litvan.

To contact the editors responsible for this story: Kevin Whitelaw at kwhitelaw@bloomberg.net, Larry Liebert, Ros Krasny