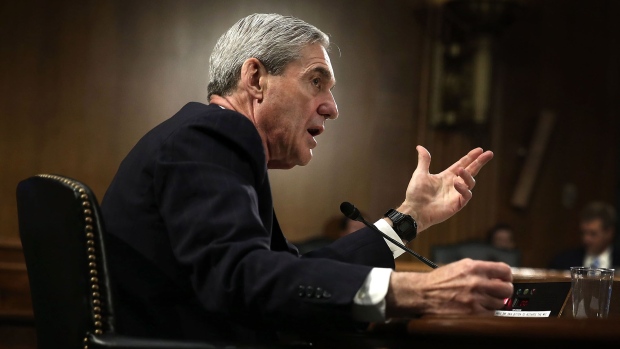 (Bloomberg) -- The Justice Department told former Special Counsel Robert Mueller that his public testimony should remain within the boundaries of his already released report on President Donald Trump and the 2016 election.

Responding to a request from Mueller for the department’s guidance on his appearance at two House hearings scheduled for Wednesday, the Justice Department said that Mueller shouldn’t discuss ongoing cases and that some details of his work may be covered by executive privilege.

While Mueller has already indicated publicly that he has no intention of going beyond what’s in his 448-page report, the guidance may disappoint Democrats who want him to offer more details about multiple instances where he investigated Trump for possible obstruction of justice.

Justice Department policy “also precludes any comment on the facts developed and legal conclusions by the Special Counsel’s Office with respect to uncharged individuals, other than information contained within the portions of your report that have already been made public,” Bradley Weinsheimer, an associate deputy attorney general, wrote to Mueller in a letter Monday.

The former FBI director plans to deliver an opening statement on Wednesday, but the prepared remarks haven’t been vetted by the Justice Department, according to Jim Popkin, a spokesman for Mueller.

Mueller is set to testify Wednesday for five hours before the House Judiciary and Intelligence panels.

“I’m not going to be watching,” Trump told reporters Monday at the White House before adding, “Probably, maybe I’ll see a little bit of it.”

Mueller said he didn’t find enough evidence to prove that those around Trump conspired in Russia’s interference in the 2020 election and that he couldn’t exonerate the president on whether he sought to obstruct justice by impeding the probe.

To contact the editors responsible for this story: Kevin Whitelaw at kwhitelaw@bloomberg.net, Larry Liebert