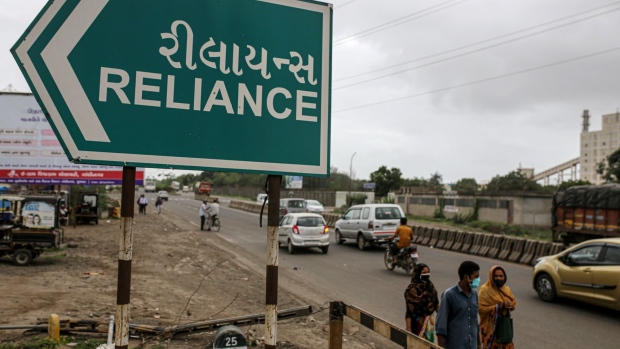 A road sign for the Reliance Industries Ltd. oil refinery in Jamnagar, Gujarat, India, on Saturday, July 31, 2021. The Indian city of Jamnagar is a money-making machine for Asia's richest man, Mukesh Ambani, processing crude oil into fuel, plastics and chemicals at the world's biggest oil refining complex that can produce 1.4 million barrels of petroleum a day. , Bloomberg

The conglomerate, controlled by billionaire Mukesh Ambani, expects India in April to raise the price cap for its offshore gas sales by nearly 60% to around $10 per million British thermal units, Sanjay Roy, senior vice president for exploration and production, said Friday. The government sets the cap every six months based on international rates.

That will benefit the company’s operations in Krishna-Godavari fields in the Bay of Bengal, where production increased 36-fold in the quarter ending Dec. 31 from the same period the year before. The Indian conglomerate along with its partner BP Plc is now producing 18 million cubic meters of gas everyday and is expected to reach 30 million cubic meters daily in 2023, Roy said.

Reliance’s revenue from oil and gas production jumped to 25.6 billion rupees ($343 million) in the December quarter. It represents a marked turnaround for the upstream business, which had operating losses as recently as the quarter ending September 2020 after earlier discoveries in the same area dried up faster than anticipated.