“Mulan” producer Jason Reed was in Mexico City last March promoting his soon-to-be-released film when he got the call that Walt Disney Co. was postponing its debut due to the coronavirus.

What followed was a summer of discussions between Disney, Reed and director Niki Caro as the company wrestled with when and how to release the US$200 million live-action remake of its 1998 animated hit. This weekend they’ll all get to see if they made the right call.

Disney is making “Mulan” available on its Disney+ streaming service for an extra US$30 starting Friday. The film now joins others, including Universal’s “Trolls World Tour” and Warner Bros. “Scoob!,” in bypassing theaters and going directly to consumers. It’s a trend that has many in Hollywood concerned about the future of films in theaters.

They might be worrying too much. Without theaters, Disney and other studios would struggle to replace the revenue they have historically gotten from releasing big-budget films first in cinemas, then home video and later TV.

“They understand how important the theater is as a channel for distribution,” said Steve Nason, research director at the consulting firm Parks Associates. “They just couldn’t wait any longer.”

Prior to the pandemic, “Mulan” had been scheduled to hit theaters March 27. The company had already held the red-carpet premiere and spent heavily on advertising. But the film was postponed three times before its Disney+ debut was set.

Disney is trying a hybrid approach. It’s releasing the film in theaters in Asia, where cinemas have been back open longer and the Asian cast and story are likely to have strong appeal. In the U.S. and Europe, “Mulan” will be online, where Disney+ has already built a sizable subscriber base. 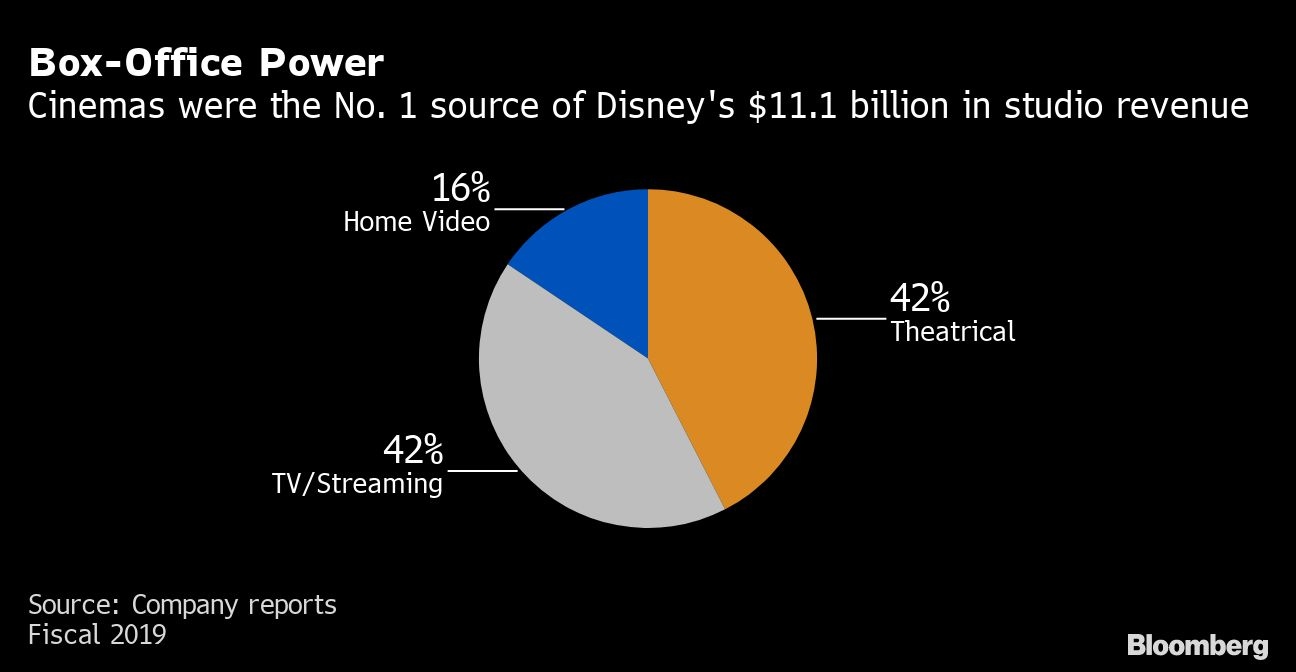 The film could take in as much as $200 million in Chinese theaters alone when it debuts there on Sept. 11, according Morgan Stanley analyst Benjamin Swinburne.

“While difficult to quantify, we believe there is value in the ability for a theatrical release to ‘eventize’ a tentpole film, especially for Disney’s key franchises,” he said in a research note.

“We can test almost anything when you have your own platform,” Chapek said, adding that he hoped the debut could attract new customers to the $7-a-month Disney+ service. The company saw overall subscribers rise by 6 million to 60.5 million in the quarter when it released the hit musical “Hamilton” on the service instead of in theaters.

Just how much “Mulan” will generate online is anyone’s guess, but the economics of streaming are different. For starters, theaters won’t get the cut of tickets sales they usually do with big releases.

Last year’s live-action remake of “Aladdin,” for instance, took in $356 million at the domestic box office, according to Richard Broughton, research director at London’s Ampere Analysis. That suggests theater owners collected about US$125 million in ticket sales for themselves.

With “Mulan,” online distributors like Apple Inc. and Roku Inc. will get a smaller share, meaning Disney will net about US$25 from each online purchase. On that basis, the company will need a little over 9 million purchases to equal what “Aladdin” generated for it in theaters. That might be a tall order, considering Disney+ subscribers will be able to watch the film as part of their regular subscription starting Dec. 4.

There’s another piece to direct-to-consumer math that people often miss, Broughton said. Online debuts don’t just leave behind theater revenue, they also eliminate much of the money consumers would have spent on DVDs or digital film purchases. Last year, Disney generated 58 per cent of its total film revenue from theaters and home video, although the remaining source -- streaming and TV -- grew the fastest.

“Our conclusion is that theatrical should continue to underpin most release strategies,” Broughton said.

And if Disney had to mix things up for the Covid-19 era, producer Reed is OK with it.

“Though the movie is gorgeous and epic in scale and big battle sequences, the core of the movie is ultimately this girl’s story,” he said. “The movie stands up on a small screen almost as well as on the big screen.”