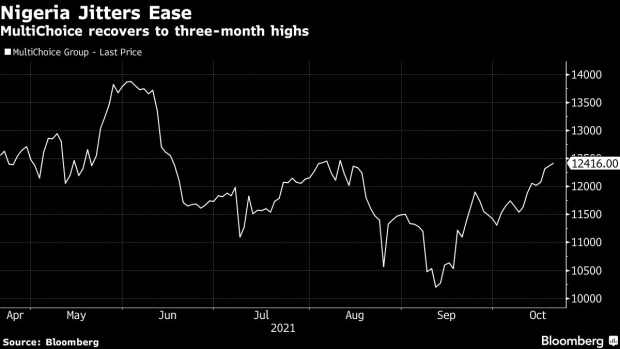 A Nigerian tax tribunal cleared MultiChoice Group Ltd., Africa’s biggest pay-TV provider, to appeal a disputed $4.4 billion tax bill in the country, according to people familiar with the case.

The South African company’s local unit was allowed to proceed after paying an 8 billion naira ($19.4 million) deposit, said one of the people, who asked not to be identified as the details haven’t been made public.

The ruling came as somewhat of a reprieve for the Johannesburg-based firm, as the West African nation’s tax authorities said in August it would have to pay half the claim, or $2.2 billion, to argue its case. The shares slumped on that news, but have since recovered to trade at near three-month highs.

MultiChoice is challenging the penalty imposed by the Federal Inland Revenue Service, which said the owner of the DSTV service skipped taxes and denied auditors access to its servers. The $4.4 billion claim is well above the company’s market value of about $3.8 billion.

Appealing a major tax claim in Nigeria worked for fellow South African giant MTN Group Ltd., which owns Nigeria’s biggest mobile-phone provider and has battled several multi-billion dollar disputes with the country’s authorities. Those included a $2 billion tax bill in 2018, which was eventually dropped more than a year later.

Nigeria is seeking to boost tax compliance to fix revenue shortfalls, Finance Minister Zainab Ahmed said last week. The country is aiming for a revenue-to-GDP ratio of 15% by 2025, up from 8% currently. Rising debt-service costs, which now account for about 70% of government revenue, are constraining what the government can spend on key infrastructure.