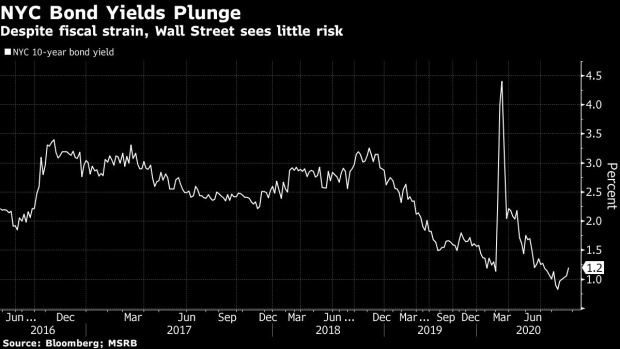 (Bloomberg) -- Jerry Seinfeld came to New York City’s defense after a blogger wrote that the city is “Dead Forever.” For now, the bond market agrees with the comedian.

There were plenty of mutual funds, insurance companies and other institutional investors willing to lend to the city when it sold $1 billion of bonds on Wednesday. The 10-year bonds were priced to yield just 1.45%, far from a signal of imminent default. The yield was slightly higher than general obligation bonds rated A-, four levels below the city’s current rating and the same as Philadelphia, according to data compiled by Bloomberg.

The city received about $1.9 billion of orders, or twice the bonds offered for sale, from institutional investors and another $212 million from individual investors.

“I have to explain to clients that the city isn’t on the verge of bankruptcy,” said Howard Cure, who has analyzed municipal bonds for more than 30 years and is head of municipal research at Evercore Wealth Management. “It’s not the 1970s.”

Which isn’t to say New York City, the epicenter of the coronavirus pandemic in March, doesn’t have serious problems.

Unemployment has swelled to 20%. Revenue in the city’s $88.2 billion budget, is $7.1 billion lower than projected in January. Evictions loom. Violent crime is on the rise, with murders up 30% in the first seven months of 2020 and shootings up 177%, according to the New York Police Department. More than 420,000 residents left the city between March 1 and May 1, the New York Times estimated, based on an analysis of data from cellular phone towers. The Metropolitan Transportation Authority, which runs the subways, buses, and commuter trains, is warning of draconian service cuts that would upend residents’ daily lives.

But the dark headlines haven’t affected investors, who are more concerned with how low bond yields have dropped than they are about the demise of the most populous U.S. city, said Cooper Howard, director of fixed-income strategy at the Schwab Center for Financial Research, the firm’s independent research arm. The Federal Reserve’s commitment to keep interest rates near zero and lend to states and local governments if necessary -- coupled with a wave of muni debt payments this summer that were reinvested -- has depressed yields to the lowest since the 1950s.

Howard, like other municipal analysts, is projecting credit-rating downgrades, but not defaults on state and local government debt. The muni market expects that Congress will likely pass an aid package for states and local governments, he said. And states and cities entered the recession in relatively strong shape, having seen tax collections swell during the long economic expansion.

Mayor Bill de Blasio balanced this year’s budget using almost $3 billion in reserves and $3 billion of cost-saving measures, including cutting police overtime and cutting July’s police officer class. The mayor has threatened to lay off as many as 22,000 employees if the city and public employees unions can’t find $1 billion in savings, like changing work rules or modifying health benefits

New York City is counting on a federal relief package and is pushing for state legislation that would allow it to borrow as much as $5 billion if relief isn’t forthcoming. The biggest risk is the trajectory of the virus itself: Although the percentage of people testing positive for the virus in the city has plummeted to less than 1%, a recurring surge could lead to another round of shutdowns and spur more residents to leave the city.

Still, New York, the financial capital of the world, has a lot going for it. Wall Street’s profits soared to $10.7 billion in the first quarter, the most profitable quarter in more than a decade, as traders capitalized on volatility. Facebook Inc. and Amazon.com Inc. recently announced large leases in midtown Manhattan. The city’s cultural institutions and universities won’t disappear, neither will its attraction to strivers and tourists, alike.

“Energy, attitude and personality cannot be ‘remoted’ through even the best fiber optic lines,” Seinfeld wrote in a New York Times op-ed. “That’s the whole reason many of us moved to New York in the first place.”