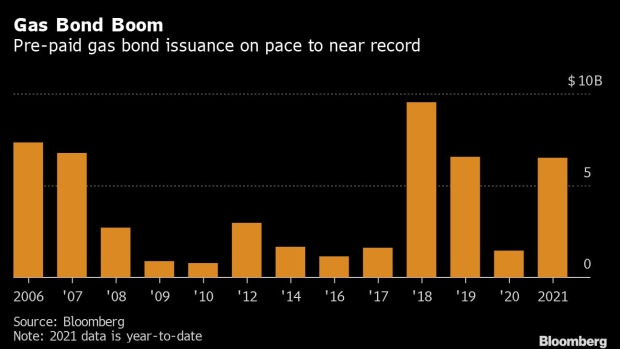 (Bloomberg) -- Municipal-bond sales are surging in one corner of the market as banks seize on a way to secure low-cost financing, bucking the broader slowdown in borrowing by state and local government agencies.

Issuance of so-called prepaid gas bonds -- which municipal utility agencies sell to lock in long-term fuel supplies from commodity trading arms of banks -- have jumped to some $6.5 billion this year, more than four times as many as were sold in all of 2020, according to data compiled by Bloomberg.

The increase has been driven by the gap between yields in the tax-exempt and taxable debt markets, which widened earlier this year as investors shifted into municipal bonds on speculation that tax rates will rise under President Joe Biden.

That’s effectively given banks access to a low-cost source of funds in the municipal-bond market, since they receive the proceeds of the debt sales in exchange for providing gas supplies in the years ahead.

“Its simply cheap financing for banks right now,” said Charlie Hill, a portfolio manager at  T. Rowe Price Group Inc. “Munis are very rich to Treasuries in the front end of the curve, so if [prepaid gas bonds] can price relative to a rich AAA, its cheaper than coming in the corporate market.”

Two year tax-exempt bond yields over the past two decades have, on average, been roughly the same as those on Treasuries. But the municipal bonds were yielding about 49% of Treasuries by the close of trading Thursday. In August, that ratio hit a record low 26%, according to data compiled by Bloomberg.

The analysts said that such issuance historically has had more to do with the relationship between market interest rates than it has with commodity prices. But they said that the rising price of natural gas may give utilities a reason to lock in supplies at current prices.

“While higher prices may attract municipal utilities to structure prepay gas deals in order to lock in long-term savings on their natural gas purchases, we find that the historical relationship between natural gas prices and prepaid gas supply is not that strong,” the analysts wrote in an Oct. 21 research note.