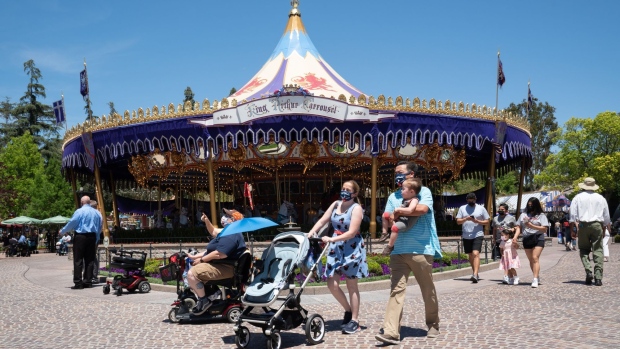 Guests wearing protective masks walk past the King Arthur Carrousel attraction during the reopening of the Disneyland theme park in Anaheim, California, U.S., on Friday, April 30, 2021. Walt Disney Co.’s original Disneyland resort in California is sold out for weekends through May, an indication of pent-up demand for leisure activities as the pandemic eases in the nation’s most-populous state. Photographer: Bing Guan/Bloomberg , Bloomberg

(Bloomberg) -- The persistence of the pandemic is dealing a fresh financial hit to corners of the municipal-bond market.

As the strength of the tourism revival is restrained by the surge in the delta variant, S&P Global Ratings this month downgraded bonds partly backed by hotel-room revenue in Anaheim, California, the home of Disneyland.

Bonds issued for New York’s Jacob K. Javits Convention Center had their rating cut by Moody’s Investors Service, with the trade association business plunged back into uncertainty. And Fitch Ratings knocked down its grade of the subway system serving San Francisco, the tech industry hub where companies have been kicking back the timeline for returning to the office.

“Whether you take a vacation is one of the most discretionary choices you have,” said Dora Lee, director of research at Belle Haven Investments, which oversees $15.4 billion in investments. “Destinations like Disneyland and going to New York City for a trip, you don’t have to do those things. So when you’re talking about individual decision making, I would expect that sector to be one of the last to recover.”

The pockets of stress stand in contrast to the rest of the $4 trillion municipal-securities market, where most borrowers have been recovering from the pandemic’s toll along with the economy. States, local governments and public transportation systems also received an unprecedented infusion of aid under President Joe Biden’s rescue plan.

But the impact of the delta variant, which dashed hopes for a swift return to normal life after the rollout of the vaccine, has continued to weigh on segments of the economy, particularly those tied to business travel, commuting and tourism. That can affect agencies that sold bonds backed by revenue from hotels, convention centers and leisure activities, among others.

“Tourism-related credits were the first thing on our mind when the pandemic occurred,” Michael Parker, a credit analyst at S&P, said in an interview. “Nationally it’s still not fully recovered at this point.”

That delayed recovery led S&P to cut the rating on bonds sold for Anaheim, California, on Friday by two notches to BBB, two steps above junk. The debt, backed in part by revenue from a tax levied on certain Disney hotel rooms, has a negative outlook, signaling a risk of further downgrades.

S&P also knocked New Orleans, Louisiana’s credit rating down one notch last month to A+ due to a “decline in available reserves,” noting that “tourism and conferences remain a significant portion of the city’s economy and the city has seen significant revenue declines due to the pandemic.”

The Javits Center in Manhattan is facing similar pressures. Moody’s this month lowered its ratings on about $1 billion of bonds sold for the facility and maintained a negative outlook because the pandemic “has created severe and ongoing disruptions in the New York City travel and tourism market and therefore pledged revenue receipts.”

Fitch Ratings downgraded the San Francisco Bay Area Rapid Transit’s rating one notch in mid-August. It said the system is facing risks brought on by “fundamental changes in commuter behavior and transit demand over the next several years.”

Belle Haven’s Lee said that credit rating companies broadly held off on initiating deep downgrades after the onset of the pandemic, waiting to see how it would ripple through their finances, and the series of stimulus measures enacted in Washington prevented widespread defaults. She said the companies now may be more active from here on.

“I think now that we know what the new normal may look like, rating agencies may be more willing to recalibrate their grades,” she said.