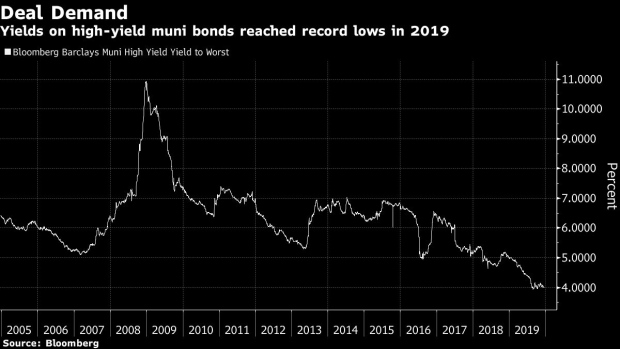 (Bloomberg) -- With interest rates at near record lows and vast amounts of cash seeking a home, some issuers in the municipal-bond market have shed financial safeguards investors once could demand before buying.

The weakening of those covenants, especially on high-yield and lower investment-grade deals, has raised the specter of more defaults in the $3.8 trillion state and local debt market, a haven where failures are still relatively rare. And amid seemingly insatiable demand in a sellers’ market, muni buyers likely will continue to accept fewer protections against default or bankruptcy.

“The only movement this year has been toward lighter covenants,” says Matt Fabian, a partner at Municipal Market Analytics. “Next year is geared for more of the same -- slowly tighter spreads, steadily strong demand.”

Covanta Holding Corp., a waste management company, offered no debt service reserve fund or mortgage pledge to investors when it sold $50 million in junk-rated bonds earlier this year. Nor did the Brooklyn Law School, which sold Baa1 rated debt in May. As part of that refunding, the law school terminated a mortgage that prior bondholders had on campus property. And the Pan-American Charter School, which sold unrated debt in July, didn’t offer a debt service reserve fund to investors when it sold bonds to build a new charter school in Phoenix.

High-yield muni-debt funds have seen $18.5 billion in cash flood in during 2019, the highest since records began in 1992, according to Refinitiv Lipper US Fund Flows data. That’s helped propel high-yield municipals to a 10.6% return this year, the most since 2014, according to Bloomberg Barclays indexes. Municipal-bond mutual funds have enjoyed 50 straight weeks of inflows, including $1.56 billion of new cash during the week ended Wednesday, according to Refinitiv Lipper.

All that demand has helped pressure yields and made borrowing cheaper for issuers with lower credit ratings. Along with the coupon and yield bond investors also receive “pledged security” from borrowers but it appears that “if investors are willing to relent on income, they’re likely willing to relent on security as well,” Fabian said.

With the trend of looser covenants expected to continue, credit surveillance and open access and trust in management becomes more important, said Dora Lee, director of research at Belle Haven Investments, which manages about $10.6 billion of municipal bonds. Investors have to ask themselves whether they want to take additional risk as spreads tighten, Lee said.

“In theory, covenant breaches give bondholders time to intervene before there is a monetary default,” Lee said. “With covenants so weak, there is less time for bondholders to do that.”

--With assistance from Amanda Albright.

To contact the reporter on this story: Shruti Date Singh in Chicago at ssingh28@bloomberg.net

To contact the editors responsible for this story: Elizabeth Campbell at ecampbell14@bloomberg.net, Michael B. Marois, Christopher Maloney