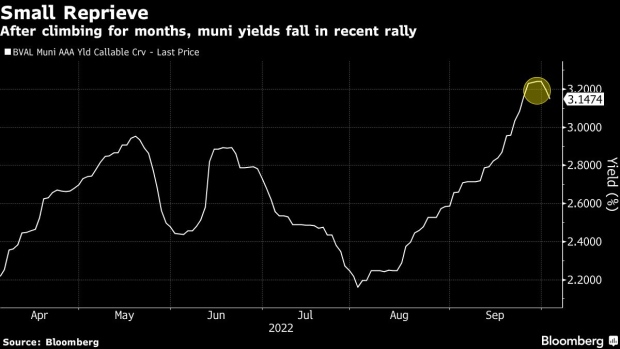 Construction on the Corpus Christi Harbor Bridge in Corpus Christi, Texas, U.S., on Thursday, April 1, 2021. Republicans may be ready to support limited infrastructure funding in President Biden's spending proposal, which would require scaling back the $2.25 trillion plan by more than two thirds, a senior GOP senator said. , Bloomberg

(Bloomberg) -- After months of anguish, municipal bond investors are finally seeing a moment of reprieve.

State- and local-government debt extended a rally Tuesday, with 30-year maturities heading for their biggest one-day gain since June as traders weighed the odds the Federal Reserve will moderate the pace of its policy tightening. Yields on the municipal bonds tumbled as much as 7 basis points Tuesday, according to data compiled by Bloomberg, with a key index fresh off its biggest jump in three months.

“The market feels firm,” said Sylvia Yeh, co-head of municipal fixed income at Goldman Sachs Asset Management LP, though she warned that the rally “feels more like a pleasant interruption” than a trend.

While she said demand for bonds has picked up and new issue supply is unusually light for October, there are still signs that Fed officials will overlook economic softness in their fight against inflation.

It’s a question being asked across global markets, which have rallied this week amid speculation that central banks could moderate their hawkish stance to prevent a hard landing. The S&P 500 Index is on course for its best two-day surge since April 2020, while yields on 10-year Treasuries edged lower after falling nearly 20 basis points on Monday.

For municipals, though, it’s a “fake rally” driven by a lack of new bond sales, said Vikram Rai, the head of Citigroup Inc.’s municipal-bond strategy group. “We will only see a legitimate rally when the rate market stabilizes and when mutual funds have cash to put to work.”

Municipal bonds have lost nearly 12% in 2022, on track for the worst yearly performance since at least the 1980s, driven by the Fed’s aggressive rate hikes. Yields on benchmark 10-year municipal bonds had jumped as high as 3.24% in late September, the highest since early 2011 -- and more than 200 basis points from where they started the year.

“Municipal bond yields have reached attractive levels with strong credit fundamentals right now,” said Dan Solender, head of municipals at Lord Abbett & Co. “A lot of investors have interest but just want to see stability in rates, which might be finally happening.”

Dennis Derby, a portfolio manager at Allspring Global Investments LLC, said the rally would need to be sustained to reverse the mutual-fund outflows that have persisted for much of 2022. Investors yanked about $3.6 billion from municipal-bond mutual funds during the week ended Sept. 28, the eighth straight week of withdrawals, according to Refinitiv Lipper data.

“While there is still apprehension in the space, we are certainly seeing more client interest in moving into the asset class,” he said.