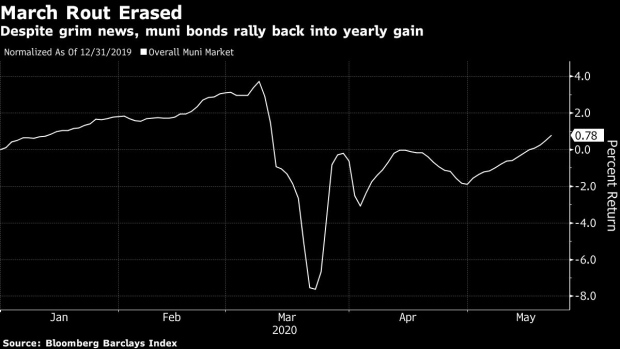 Construction resumes on a building off of Woodward Avenue in Detroit, Michigan, U.S., on Thursday, May 7, 2020. Michigan Governor Gretchen Whitmer is giving the state's construction companies the green light to resume work on Thursday, as well as Detroit’s three carmakers and other manufacturers approval to open up factories starting May 11. Photographer: Emily Elconin/Bloomberg , Bloomberg

(Bloomberg) -- Municipal bonds are set for their biggest monthly gain since 2009, underscoring the disconnect between the $3.9 trillion market and the economic collapse that’s driving states and cities toward what may be the worst fiscal crisis in decades.

The securities have returned 2.7% so far in May, according to the Bloomberg Barclays index. The rally wiped out the record-setting loss that hammered investors in March and is driving yields back toward the lowest in more than 60 years, with those on benchmark 10-year tax-exempt debt sliding 5 basis points Friday to 0.83%.

The advance has been spurred by an influx of cash into even the riskiest municipal bond funds since the Federal Reserve moved to backstop the market to prevent another liquidity crisis.

Patrick Luby, a municipal-bond analyst with CreditSights Inc., said that investor sentiment has grown less negative as much of the country slowly reopens from the coronavirus shutdowns. At the same time, he said, states and cities are expected to take the steps needed to balance budgets battered by the drop in tax collections.

“The serious and thoughtful way in which many issuers are beginning to wrestle with what are going to be really painful decisions from a financial and human perspective is constructive to the market,” Luby said.

The market has been whipsawed by unprecedented volatility over the last two months as investors sought to gauge how the shutdown will affect the finances of the thousands of governments and businesses that stand behind municipal bonds. That includes public transit agencies, airports, hospitals and colleges, among others that have been deeply affected by the closing of much of the economy.

With unemployment surging and retail businesses closed, states and cities are predicting hundreds of billions of dollars in budget shortfalls over the next few years. While House Democrats have proposed extending them some $1 trillion in aid, whether any such help will be approved by the Republican-controlled Senate is uncertain.

Even so, the bonds backed by states and cities are among the least likely to default, since governments have the ability to raise taxes and bond payments make up a relatively small share of their budgets.

No state has defaulted since the Great Depression and just a few local governments went bankrupt during the last recession. Since 1970, only about $72 billion of the municipal bonds rated by Moody’s Investors Service defaulted, with about $66.5 billion of that from the bankrupted governments of Detroit, Jefferson County, Alabama, and Puerto Rico, according to a December report from investment firm VanEck.

Still, the muncipal market is dominated by individual investors, who tend to become skittish and withdraw their money when bad news piles up, a phenomenon that analysts refer to as “headline risk.”

“Prices move up or down with greater velocity when you’ve got less liquidity,” said Luby. “There’s still a an enormous amount of uncertainty in the market.”