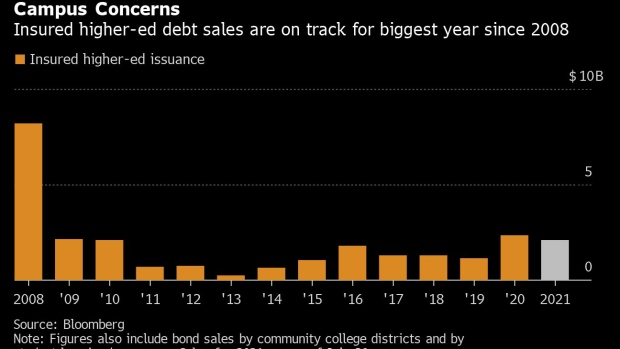 (Bloomberg) -- Municipal-bond investors still have concerns about the future of higher education even as schools in the U.S. look to a more normal-looking academic year thanks to Covid-19 vaccinations.

In the roughly $340 billion corner of the muni market that comprises the debt of universities, community college districts and student-housing borrowers, there’s been a surge in issuance that’s insured by outside companies. Such sales are on track for their busiest year since the 2008 financial crisis, a period when bond insurers’ footprint in municipal finance was fading but still much bigger than today.

The issuers’ move to add this protection, which insulates buyers from the risk of payment defaults, shows the borrowers anticipate that it will boost demand and lower debt-service costs. The upshot is that in the eyes of investors, the pandemic has only magnified a divide that was growing even before the outbreak triggered enrollment declines and credit-rating downgrades for some schools.

“The pandemic has just accelerated the bifurcation” between schools with strong name recognition and those that have less of an academic track record or established niche, said Dora Lee, director of research at Belle Haven Investments. “I don’t think these problems will go away when the pandemic is over.”

S&P Global Ratings said in a June report on private colleges that it expects the pandemic’s repercussions to be spread across multiple fiscal years for most institutions, saying it had a negative outlook on about 30% of private colleges and universities it rated as of June 15. In the spring semester of this year, undergraduate enrollment at U.S. colleges fell 4.9% from a year earlier, according to the National Student Clearinghouse Research Center.

With those strains still evident, investors are keen to have some extra protection. Last quarter was the busiest for insured higher-education bond offerings since 2008, with about $1.4 billion sold, data compiled by Bloomberg show. For all of 2021, such issuance has tallied around $2.1 billion, close to surpassing sales in 2020, when the insurance industry saw a boom given pandemic-related credit concerns.

When Wichita State University in Kansas sold about $65 million of debt via auction this month, the winning bidder -- Bank of America Corp. -- agreed to pay the cost of insuring longer-dated maturities, according to a school spokesperson.

And in May, Montgomery County Community College in Pennsylvania determined it would be cheaper to sell bonds using insurance, amounting to savings of about $230,000 on a $42 million sale, according to a spokesperson. The school has an underlying credit rating of A1 by Moody’s Investors Service, while Assured Guaranty Ltd.’s bond-insurance arm has a financial strength rating of AA from S&P.

The demand is good news for insurers Build America Mutual and Assured Guaranty. About 8% of new state and local-debt issuance has been insured in 2021, on pace for the most since 2009, Bloomberg data show.

“This sector is not out of the woods,” said Alexander Vaisman, who leads Build America’s higher-education practice. “Covid-19 was incredibly disruptive and we’re probably going to see the ramifications of that trickle through over the next few years.”

In the first half of 2021, Build America saw a nearly 120% increase in new higher-education deals, based on the par amount, compared with the same period of 2020, according to the company. The company continues to see “healthy” activity from higher ed, with insured deals tending to be for new projects, he said.

Assured Guaranty is also seeing a strong pipeline of higher-ed deals, Jason Kissane, a managing director, said via email. That comes even as yields remain low by historical stands, which might typically crimp demand for insurance as borrowers conclude that they can sell debt cheaply without it.

In Kissane’s view, the uptick is a result of investor concerns related to the pandemic and potential credit-rating changes.

“The reality is that the sector is seeing many changes due to student demand trends, changing demographics and overall cost pressures apart from the Covid impact,” he said.