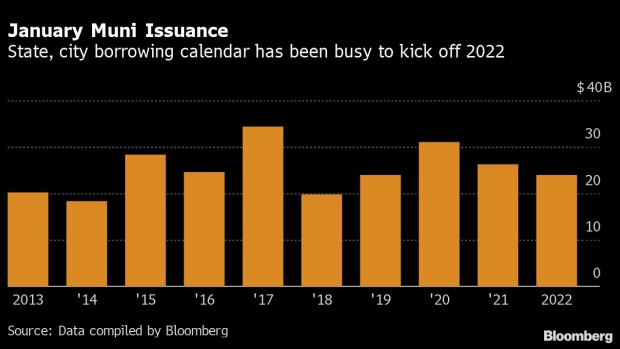 While some issuers may have had to sweeten yields to entice buyers, states and localities have sold $23.9 billion in bonds this month, down about 9% from the $26.2 billion offered in January last year, with a few days still to go, data compiled by Bloomberg show. And this has been with all the trouble in the world, at least as trouble is delineated in a bond market: Rising interest rates.

The Federal Reserve has signaled that it is going to start raising rates, and the 10-year Treasury note has responded. It yields about 1.8%, up from 1.51% at the end of 2021. The 10-year triple-A muni benchmark has followed suit, and then some. At around 1.43%, it has increased almost 40 basis points.

For those obsessed with The Ratio, a gauge of relative value, the 10-year muni began the year yielding an almost unimaginable 69.5% of comparable-maturity Treasuries, and is now a still weird, and very expensive, 75%. In the old days, munis typically yielded in the 80s; in 2018, for example, they averaged 85.6% of Treasuries. That was considered normal. Yielding 100% or more of Treasuries was rare, and insane.

And yet the steady rise in yields, which translates into higher borrowing costs, hasn’t had an appreciable impact on municipal sales. Granted, municipal bonds may not be flying off the shelves like they were last year, but the deals are getting done. This month’s issuance tally is just below the average of $25 billion in January in Bloomberg LEAG data since 2013.

This means that, generally speaking, governments borrow when they need to, regardless of where interest rates are. Issuers are “semi-rate-insensitive,” according to Vikram Rai, head of the municipal strategy group at Citigroup Inc. This is especially true when rates are “bleeding higher” slowly, he said, rather than jumping higher. He said he’s not changing his forecast of $520 billion in municipal issuance for this year, which would be a record.

Issuers have borrowed for everything this month, encompassing the full suite of stuff for which munis are sold, including charter schools, hotels, apartment complexes and retirement communities.

So it doesn’t look like higher interest rates are dissuading state and local governments from selling bonds to raise money for improvements, at least not yet. Top-rated borrowers can still access capital for 30 years for under 2%, which still seems pretty amazing to me.