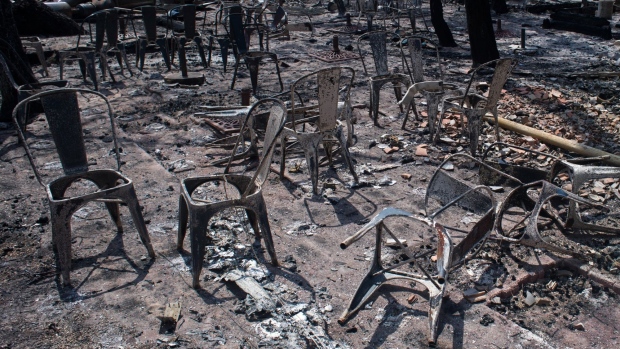 The burned out remains of a destroyed restaurant at Lagune Beach in Gironde, France, on Friday, July 22, 2022. Firefighters have battled wildfires in the Gironde region that have destroyed pine forests and campsites near the Dune of Pilat, the tallest sand dune in Europe and a popular tourist attraction. , Bloomberg

(Bloomberg) -- Munich Re’s profit slumped as the reinsurer took a hit of almost $1 billion to its investment portfolio in a volatile quarter for financial markets.

While Munich Re confirmed its target for a profit of 3.3 billion euros this year, it warned that volatile markets, an economic slowdown and the financial fallout from Russia’s invasion of Ukraine had increased uncertainty. Munich Re had suspended new business in Russia and Belarus in March and said it would stop investments there.

“That is our current best estimate. We can only book numbers based on what we currently know,” Munich Re Chief Financial Officer Christoph Jurecka said in an interview on Bloomberg Television, referring to war costs. “It’s still in the early days with a lot of uncertainty around.”

Shares of Munich Re rose 1% at 10:52 a.m. in Frankfurt trading, with analysts pointing to a surprisingly strong solvency ratio, a key measure of financial strength. Investment income was lower than expected, analysts at Citigroup wrote in a note.

Major-loss expenditures from natural catastrophes are posing another challenge, increasing by about a quarter. The costliest natural catastrophe for Munich Re in the quarter was the drought in South America, with losses amounting to about 130 million euros.

Extreme heat and arid conditions this summer have also led to water scarcity and wildfires in Europe. It is difficult to put an exact figure on costs from those events as their effects take a while to emerge, Munich Re has said earlier.

In the July reinsurance renewals, Munich Re increased the volume of business written by 6% while keeping prices stable. The primary focus of the renewals was on the Americas and Australia, and with global clients.