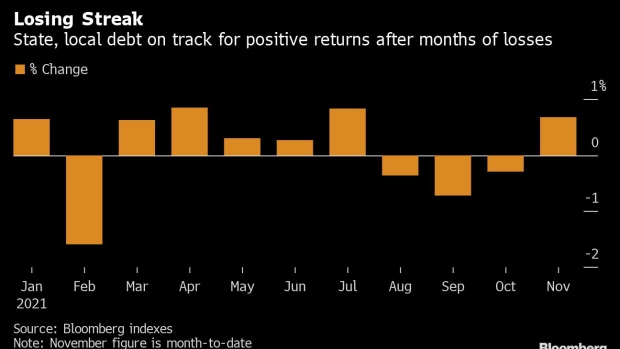 (Bloomberg) -- Municipal bonds are on track to snap a three-month losing streak as investors continue to pour cash into tax-exempt debt and as yields have stabilized after reaching their highest levels of 2021.

State and local government debt has returned 0.67% month to date, beating a 0.55% gain in Treasuries and the 0.2% decline in U.S. corporate debt, Bloomberg index data show.

November has been busy for fixed-income markets with the Federal Reserve’s tapering announcement, passage of President Joe Biden’s infrastructure package and the emergence of a new Covid-19 variant that spurred a brief flight to safety Friday in Treasuries. Still, munis have remained expensive, bolstered by generally strong local-government financial performance.

While cash has flowed into municipal-bond mutual funds for 38 straight weeks, it had eased to almost a trickle in October. It’s surged back since then, with $720 million put in during the week ended Nov. 24 and $1.4 billion the week before.

CreditSights expects at least $38 billion of redemptions in December, which would ease pressure on pricing.

“There is a really attractive new issue calendar, and that tends to motivate investors,” said Patrick Luby, a municipal strategist at CreditSights. “The market is in fairly good footing for the next couple of weeks.”