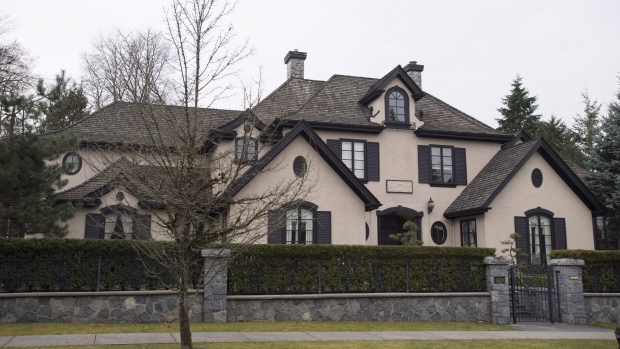 A home in Shaughnessy, an upscale neighbourhood in Vancouver, is pictured, March, 13, 2018. , THE CANADIAN PRESS/Jonathan Hayward

TORONTO -- It was a "stunning" property in the heart of downtown Toronto, but for broker Caroline Baile it was a tough sell.

That's because the home had been the site of a recent murder, a domestic dispute turned fatal. Baile would tell potential buyers about the tragic death that took place, but the property's story was already well known thanks to intense media coverage of the crime.

"It was challenging to sell it," she said, not wanting to go into too much detail to protect client privacy. "So we ended up leasing it to cover carrying costs."

The renters were aware of the property's history and once the media attention subsided, the property was sold.

But for some people, the knowledge that a murder took place in a home is enough to make them walk away from a purchase -- even if it is at a steep discount in a hot market.

That is, for those who are aware that something happened.

While there are rules requiring disclosure of issues concerning a property such as a defect like a hole in a roof or mould, for non-physical problems such as violent crime, the law largely says "caveat emptor" or buyer beware, said Alan Silverstein, an Ontario-based real estate lawyer.

John Pasalis, president of Realosophy, joins BNN Bloomberg with his outlook for the Canadian real estate market in 2019.

Quebec does have a law that requires sellers to disclose when a person has died an unnatural death on their property. But in other provinces, the guidelines are blurry.

"A murder is more psychological than factual... When you get into the area of murder and suicides, natural causes, we don't have clear rules," Silverstein said.

There are also differing guidelines for agents or sellers, he added.

In Ontario, for example, the seller has no legal requirement to disclose a stigma such as murder and the onus is on the buyer and their realtor to find out.

However, real estate agents in the province have an ethical obligation to disclose the existence of stigmas, according to the Ontario Real Estate Association.

Agents are also required to tell potential buyers about these issues at the earliest possible convenience, said Barry Lebow, a Toronto realtor and expert on stigmatized properties.

"You cannot disclose it at the table once there is an offer.... you don't wait until the last minute, but that happens," he said.

If the agent or seller is asked a question, they cannot give a false answer, Silverstein said.

The former owner of a Vancouver mansion learned this lesson after the B.C. Supreme court ordered her to return a $300,000 deposit after a sale fell through because she didn't tell the buyer about a suspected gang-related murder of her son-in-law at the front gate in 2007.

Feng Yun Shao reneged on her $6.1-million offer on the 9,000-square-foot mansion in 2009 just days after forwarding the deposit. The would-be buyer asked why they were selling and was told the owner had moved back to China and her daughter had moved to a location closer to her child's school, according to court documents.

Neither the owner, her daughter or the realtor told Shao about the unsolved slaying, and the judge said she was the victim of a "fraudulent misrepresentation."

Still, as homes change hands over the years, a property's dark secrets don't always get passed on.

"If the seller doesn't know about something, it's hard to hold them liable," Silverstein said.

Also, it's unclear how far back in a property's history must be disclosed. Some jurisdictions, such as California, stipulate the seller is obligated to disclose a death on a property if it occurred within the three years prior to the sale.

"We need some hard and fast rules," Silverstein said.

Buyers who are uncomfortable with living in a home where a violent crime took place should do extensive research on any property that catches their eye. In addition to the obvious online address searches, potential buyers should also ask their would-be neighbours for information about the home, said Silverstein.

Another thing to look for is a line in the listing that asks potential buyers to call the listing agent before preparing an offer, said Toronto realtor David Fleming.

Buyers can also add a clause that the sellers acknowledge that to the best of their knowledge there hasn't been a murder or suicide in the home.

Sandra Pike, a realtor based in Halifax, said most agents in the region add in this caveat stipulating that the property has not been stigmatized by things such as murder, suicide or illegal drug cultivation.

"You wouldn't want to be dishonest and not bring that up... If it comes back and bites you, it's not worth it," she said.

Some homes may never shake off the stigma, no matter how much time passes. The St. Catharines, Ont. home where convicted killer Paul Bernardo and his former wife Karla Homolka raped and murdered two teen girls was torn down in 1995.

Even in high-profile cases, there are some people who aren't deterred, said Barry Cohen, a Toronto-based luxury property realtor.

The unsolved murders of Apotex Inc. founder Barry Sherman and his wife Honey at their mansion in northern Toronto has not hurt the sale prospects for nearby homes that he is representing, as most see it as an isolated incident and not a reflection of the neighbourhood, Cohen said.

As well, while the Shermans' home is not currently on the market, Cohen said there is buyer interest.

"The client would buy it as is."