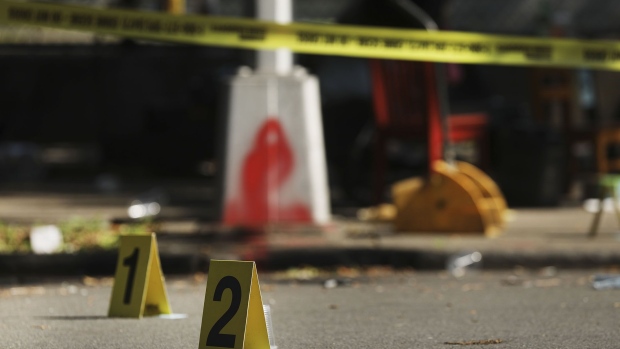 NEW YORK, NEW YORK - JULY 13: Police ballistic markers stand besides a child's chair and bicycle at a crime scene in Brooklyn where a one year old child was shot and killed on July 13, 2020 in New York City. The 1-year-old boy was shot near a playground during a Sunday picnic when gunfire erupted. Two other adults were wounded in the evening shooting. New York City has witnessed a surge in gun violence over the past month with 9 people killed, including children, and 41 others wounded on the Fourth of July weekend alone. The gun violence is occurring against the backdrop of a nationwide movement to consider defunding police departments. (Photo by Spencer Platt/Getty Images) , Photographer: Spencer Platt/Getty Images North America

(Bloomberg) -- Murder rates soared in the U.S. in the first half of 2020, even as other violent crimes such as rape and robbery declined, according to preliminary data released by the Federal Bureau of Investigation on Tuesday.

The FBI’s Preliminary Uniform Crime Report revealed declines in the number of violent crimes and property crimes reported by law enforcement agencies from January through June of this year compared with the first six months of 2019. Overall, violent crime fell 0.4% despite the spike in murders.

The report is likely to fuel controversy as President Donald Trump makes a vow to enforce “law and order” a centerpiece of his re-election campaign. Although the murder rate is climbing on his watch, Trump blames Democratic-led city and state governments for violent protests and portrays rival Joe Biden as unable to take on left-wing anarchists.

Incidents of rape fell almost 18% over the six months, while property crime and burglary rates each fell almost 8% and robberies declined about 7%. Violent crimes fell by nearly 5% in the Northeast, the most of any region in the country.

The report offered no explanation for the surge in murders. The FBI cautions against using the statistics to compile rankings of cities and counties, saying that doesn’t “provide insight into the numerous variables that shape crime in a given state, county, city, town, tribal area or region.”