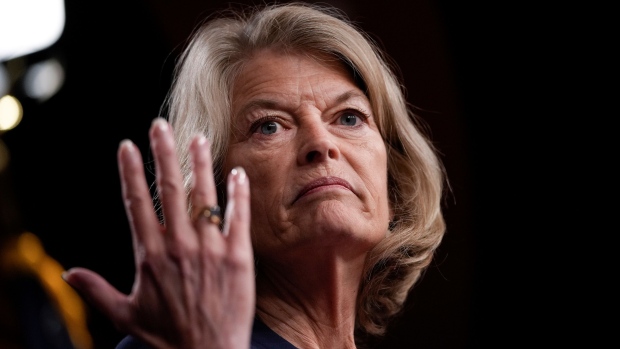 (Bloomberg) -- Republican Alaska Senator Lisa Murkowski and Kelly Tshibaka -- a former state official backed by Donald Trump -- both advanced to a general election race under a new format that may have helped save the incumbent’s candidacy.

With 52% of the votes counted, Murkowski had a lead of about 1,700 votes over Tshibaka, according to results published by AP. Democrat Patricia Chesbro and Republican Buzz Kelley were far behind the frontrunners but could also advance to the November election if they hold their positions in the 19-person primary.

In a separate primary to represent Alaska in the House of Representatives, former Governor Sarah Palin -- also backed by Trump -- was one of four candidates advancing out of the primary as well.

Trump endorsed Tshibaka last year in a bid to oust Murkowski after she was one of seven GOP senators who voted to convict him in his impeachment trial following the Jan. 6 riot at the U.S. Capitol.

Murkowski advanced to the November general election the same night that Republican Liz Cheney, a Wyoming Republican, lost her primary contest. Trump had aimed his vengeance on Cheney for voting to impeach him and chairing the House committee’s investigation into the insurrection.

In Alaska, Trump’s bid to oust Murkowski faced a steeper climb since the 65-year-old senator could count on some support from Democrats and Independents loathe to back Trump’s choice.

Longtime state pollster Ivan Moore of Alaska Survey Research said the open primary and ranked-choice voting method could save Murkowski in November because if she had to run in a purely Republican primary against Tshibaka, she would have almost certainly lost in “just a drubbing of the first order.”

Murkowski lost the Republican primary in 2010 but won the general election and re-election to another term that year running a write-in campaign.

Moore said he would consider Murkowski the favorite in the general election this year because of her appeal across party lines and with the ranked-choice voting method, which allows voters to rank candidates in order and have their backup choices count if their top picks are eliminated.

Trump staged a rally in Alaska on July 9 for Tshibaka and his other endorsed candidates in the state, including Palin. The former president blistered Murkowski, calling her “a lousy senator” while praising Tshibaka as a “conservative warrior.”

Tshibaka has portrayed Murkowski as a career politician “who can’t be trusted,” while branding herself a political outsider who would be a “a strong independent Alaskan leader.”

Murkowski said the race is about who can best deliver for Alaska, saying in one television ad that she’s willing to work in a bipartisan way to help the state because “through my seniority, I get real results for our state.”

Trump has endorsed 270 candidates for international, federal, state, local and political positions since leaving office. Of the candidates who have faced voters, 216 have won or advanced to the general election -- almost a third ran unopposed -- and 17 have lost.