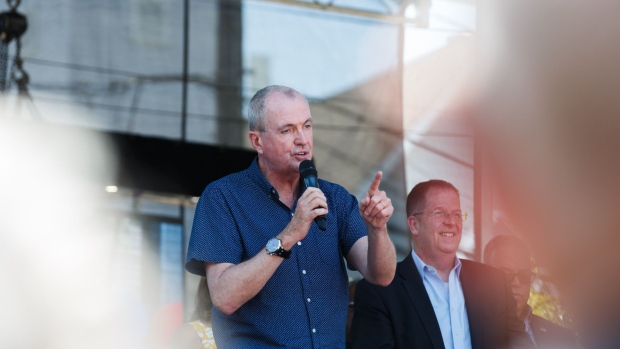 Jack Ciattarelli, Republican candidate for governor of New Jersey, speaks during an interview in Princeton, New Jersey, U.S., on Friday, Oct. 8, 2021. Though incumbent Phil Murphy is favored to win November's election, Ciattarelli, a former assemblyman, has been closing the gap as he blasts New Jersey's high taxes and the governor's handling of the pandemic. , Bloomberg

(Bloomberg) -- New Jersey Governor Phil Murphy said he is leaning on liberal Democratic values as he tries to lure companies from lower-taxed Republican states, revive the economy and win a second term.

Murphy, 64, would become the first New Jersey Democrat to be re-elected governor in four decades if he wins the Nov. 2 election. He says he’s blunted the pain of New Jersey’s highest-in-the-nation property taxes with rebates, credits and increased school aid while making college, health care and childcare more affordable.

The former Goldman Sachs Group Inc. executive says businesses want more for their money. Republican strongholds like Texas and Georgia might have lower taxes, but highly-skilled employees at film, digital and other companies want to live in states with progressive stances on abortion, voting rights and gun control, Murphy said Thursday during an interview with Bloomberg News in Newark.

“If your business model includes high value-added, highly skilled workforce, we’re on your list,” he said. “We are not going to be the low-cost state to live or work in.”

Murphy has increased state spending by more than $11 billion to a record $46.4 billion, compared with the last budget signed by his predecessor, two-term Republican Chris Christie. New Jersey was downgraded 11 times under Christie. Murphy said it may take at least another year to win an upgrade.

New Jersey is a Democrat-leaning state, but frustration over rising taxes has kept Democrats to one term as governor since 1977. The average property-tax bill in New Jersey was $9,112 in 2020.

Despite the high taxes, the governor said film and tech companies are coming to New Jersey because of its talent and location. Three years after reinstating a production tax-credit program, a record number of films and TV shows are being filmed in New Jersey, according to Murphy’s administration. Another example: Fiserv Inc. chose his state over Georgia as the fintech company adds 2,000 jobs and builds a new hub in suburban New Jersey.

“Before I got here, Georgia had become the East Coast film capital,” Murphy said. “That is now being challenged, mostly by us.”

Murphy called out Tesla Inc.’s decision to move its headquarters to Texas from California. “I don’t know what the employees of Tesla are gonna say to Elon Musk, but that’s a move that surprised me,” he said.

New Jersey and Virginia are the only U.S. states holding races for governor this year. Potential wins by Murphy and former Virginia Governor Terry McAuliffe could provide early indicators of how Democrats will fare in the 2022 midterm elections.

Murphy leads Republican Jack Ciattarelli, 59, who has attacked the incumbent on high taxes, vaccine mandates and mask requirements for schools.

“Recent polls have shown a single-digit race -- and we can’t afford for it to get any closer,” Murphy’s campaign wrote in an email to potential donors on Thursday.

During debates with Ciattarelli, Murphy pledged not to raise taxes if re-elected. In his first term, Murphy and the Democratic-controlled legislature increased the tax rate on annual income of at least $1 million to 10.75% from 8.97%. The money was used to provide $500 middle-class rebate checks.

New Jersey is also waiting to see whether Washington will pass an infrastructure bill before deciding where to allocate the roughly 60% of its $6.2 billion in unspent pandemic stimulus funds, he said. The state has until 2024 to decide how to use the money, which he said he doesn’t want going to plug budget holes or start programs that would need new funding when aid ran out. His administration asked U.S. Treasury to use the funds to pay off debt and is awaiting guidance.

While neighboring New York City is instituting hard mandates on vaccines for public employees, those in New Jersey can test out. More than 65% of New Jersey’s population is fully vaccinated -- the same rate as New York -- and cases and hospitalizations are declining. If that changes, a stricter mandate is “on the table,” Murphy said“I don’t want to cry wolf needlessly,” Murphy said, noting he’d be concerned with adherence rather than political fallout.

New York City wants to charge commuters driving into midtown Manhattan, but Murphy said he wouldn’t support the so-called congestion pricing plan unless some of the money collected goes into New Jersey’s infrastructure. Murphy, who could use his veto to bring business at the bi-state Port Authority to a halt, said he didn’t want New Jersey residents incurring ‘double taxation.’

Murphy said congestion pricing is among a number of transportation and infrastructure proposals -- including the Gateway commuter-rail tunnel -- that he needs to negotiate with New York Governor Kathy Hochul and New York City’s mayor.

“We’re not going to be magic wand back to normal anytime soon,” he said.