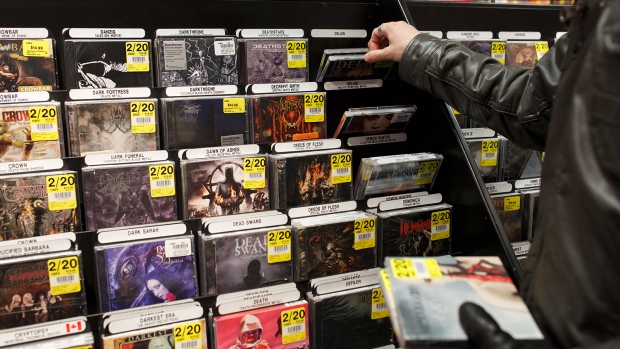 A customer browses CDs inside the HMV Canada Inc. flagship store in Toronto, Ontario, Canada, on Sunday, Jan. 29, 2017. The entertainment retailer HMV Canada Inc. will close all 102 of it's Canadian stores by April 30. , Photographer: Cole Burston/Bloomberg

Music and entertainment retailer HMV Group Plc has become the first U.K. casualty of Christmas after disappointing sales over the holiday period.

The 97-year-old company, owned by restructuring firm Hilco Capital Ltd., entered insolvency procedures for the second time in six years, threatening its 125 stores in the U.K. and 2,025 employees. It previously suffered a near collapse in January 2013, as the move toward online streaming services hit sales.

The streaming shift has only intensified since Hilco saved HMV six years ago, as Apple Inc.’s music service and Spotify Technology SA continue to dominate the music retail world.

“During the key Christmas trading period the market for DVD fell by over 30 per cent compared to the previous year and, whilst HMV performed considerably better than that, such a deterioration in a key sector of the market is unsustainable,” Paul McGowan, executive chairman of HMV and Hilco, said in a statement Friday. KPMG has been appointed as an administrator.

HMV is the first victim of a dismal Christmas for British retail, which saw stores discounting from early December to try to offset competition from Amazon.com Inc. Sports Direct International Plc Chief Executive Officer Mike Ashley warned of an “unbelievably bad” November, and spending power has been squeezed due to a low pound in the run-up to Britain’s exit from the European Union.

“Even an exceptionally well-run and much-loved business such as HMV cannot withstand the tsunami of challenges facing U.K. retailers over the last 12 months on top of such a dramatic change in consumer behavior in the entertainment market,” McGowan said in the statement.

The appointment of administrators, reported earlier by Sky News, comes just a couple of weeks after a formerly related Hong Kong entity moved to close all of its stores in the Chinese city. That business shut down its 102 stores in Canada in 2017.