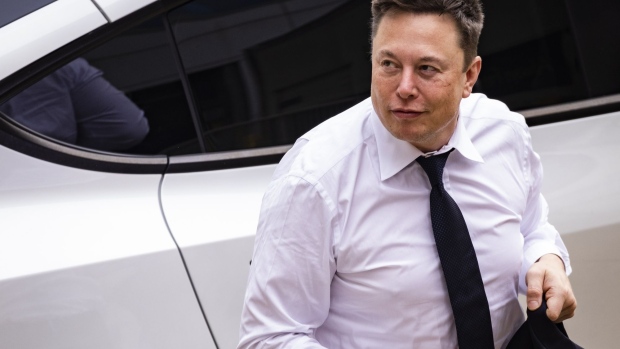 (Bloomberg) -- Elon Musk is among the guests at a Wyoming event hosted by House GOP leader Kevin McCarthy the same day that Representative Liz Cheney faces a likely primary loss to a challenger backed by the Republican establishment, according to a person familiar with the plans.

McCarthy refused to confirm or deny Musk’s attendance. “I am not going to talk about that,” he said in a telephone interview from his hotel room in Teton Village, Wyoming. Tesla didn’t respond to a request for comment about Musk or his plans.

The event is “for members, donors and candidates,” McCarthy said.

Musk, whose SpaceX has operations in McCarthy’s Bakersfield, California-area district, has donated to Republican and Democratic candidates and campaign committees since making his first contribution in 2003. His biggest investment, some $128,900, has been in committees connected with McCarthy. He’s also become increasingly vocal on political issues.

The event at a resort in Teton Village, not far from Cheney’s home, is another illustration of how much of a pariah the state’s lone House representative has become within the Republican Party because of her vocal and persistent criticism of former President Donald Trump over his role in the insurrection at the US Capitol.

It’s unusual for a party leader in the House to campaign against an incumbent in a primary, but McCarthy, who hopes to be elected House speaker if Republicans win control of the chamber after November’s midterm election, threw his support behind conservative lawyer Harriet Hageman early in the campaign.

McCarthy, who’s been a staunch Trump ally, said in the interview that he’s confident Hageman will defeat Cheney and that she “is going to be a great representative” for Wyoming. He said he’s already made plans to put Hageman on the Natural Resources Committee.

More than McCarthy, it was Trump’s backing of Hageman and his verbal attacks on Cheney that have contributed to the three-term incumbent’s trouble in Wyoming. That trouble has only increased as Cheney has taken a prominent role in the special House committee investigating the storming of the Capitol last year by a mob of Trump supporters.

Cheney has said Trump “tried to steal the last election using lies and violence to keep himself in power.” Her father, former Vice President Dick Cheney, recorded a campaign ad in which he labeled Trump a “coward.”

The latest poll in the state, by the University of Wyoming’s Wyoming Survey and Analysis Center, showed 57% of likely Republican primary voters support Hageman, while only 28% support Cheney.