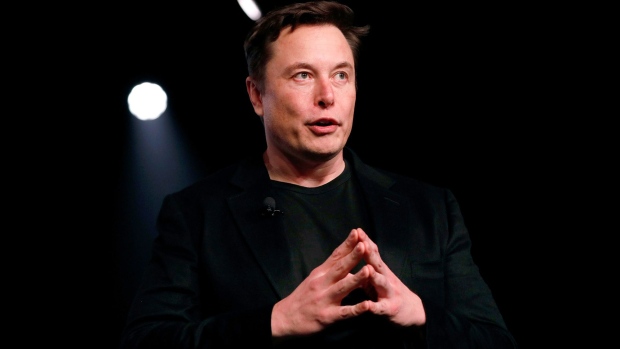 (Bloomberg) -- A Delaware state judge has rejected a request by the board of Tesla Inc. to dismiss a stockholder complaint over an “excessive” 2018 performance award to CEO Elon Musk.

In the spring of 2018, shareholders of the electric car-maker approved what may be the largest compensation deal in history for Musk, pegged on ambitions to turn Tesla into one of the world’s largest companies as it ventures beyond solar panels and electric cars.

If successful, the award could end up being worth more than $50 billion. To get it, Musk must remain at Tesla as either CEO or executive chairman and chief product officer. Musk was stripped of the chairman title last year after a battle with the U.S. Securities and Exchange Commission over his “go private” tweet.

The shareholder sued last year, accusing the board of corporate waste and Musk of unjust enrichment.

The judge says it’s significant that Musk is Tesla’s controlling shareholder and notes “the size of the award is extraordinary; it allows Musk the potential to earn stock options with a value upwards of $55.8 billion” Musk currently has a 19% stake in the company.

In allowing three out of four claims to proceed in a case that presents novel questions of law, the judge says “the award is a transaction with a conflicted controlling stockholder and, as such, it ought to provoke heightened judicial suspicion.”

--With assistance from Christopher Yasiejko.