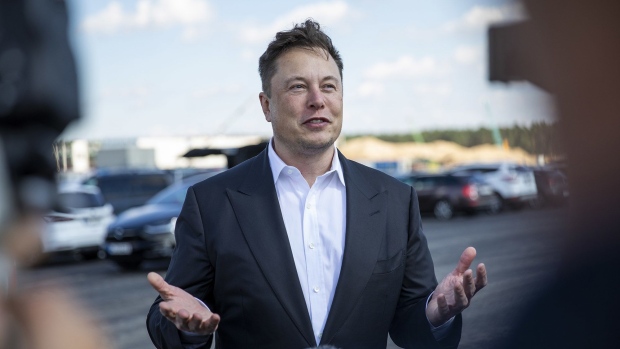 (Bloomberg) -- Elon Musk can use a $7.8 million severance payment to a Twitter Inc. whistle-blower to argue he was justified in walking away from his $44 billion buyout of the company, the latest turn in a bruising battle set for trial next month.

Delaware Chancery Judge Kathaleen St. J. McCormick ruled Thursday that the billionaire can amend his counterclaims to Twitter’s lawsuit against him with the payment to Peiter Zatko. Musk claims Twitter failed to get his consent for the severance agreement, violating the terms of the buyout. Twitter sued Musk in July to force him to consummate the $54.20-per-share deal.

The ruling is a boost for Musk in a closely watched case that has seen a torrent of subpoenas, including Musk’s of Twitter co-founder Jack Dorsey, who has been an energetic booster of the buyout. The trial is set for five days starting Oct. 17.

Zatko, Twitter’s former head of security, made headlines when he came forward to allege that he raised questions about the number of spam and bot accounts embedded in Twitter’s customer base but was ignored by management. He testified this month before the Senate Judiciary Committee that the lapses were so serious they threatened national security.

Twitter has said it fired Zatko in January for poor performance and has cited “a false narrative about Twitter and our privacy and data security practices that is riddled with inconsistencies and inaccuracies and lacks important context.”

In her brief ruling, McCormick said Delaware’s laws allow for “liberal amendment in the interest of resolving cases on the merits.”

Musk backed away from his planned purchase of Twitter earlier this year, claiming the company hadn’t leveled with him about the number of bot accounts among its more than 230 million users. Twitter counters the concerns are a pretext to get out of a deal over which the world’s richest person began to experience buyer’s remorse.

Earlier this month, McCormick allowed Musk to add Zatko’s claims about lax computer security, privacy issues and the bots to his case for canceling the buyout. But she rebuffed his bid to push back the trial so he would have more time to dig into the whistle-blower’s allegations.

Those claims were addressed at a Senate Judiciary subcommittee hearing Tuesday. At the hearing, Federal Trade Commission Chair Lina Khan said she was struck by Zatko’s allegation that Twitter misled regulators about its compliance with a 2011 agreement to tighten security controls and respect user privacy.

“There has absolutely been a problem with companies treating FTC orders as suggestions,” Khan said. “We have a program underway to really toughen that up.” She described Twitter’s 2011 deal with the FTC as “a more legacy approach” that her team is moving away from in favor of “bright line” rules setting specific boundaries for corporate behavior.

Khan’s congressional testimony could actually make it harder for Musk to use Zatko’s allegations about noncompliance with the FTC accord as a legitimate reason to torpedo the deal, Bloomberg Intelligence analyst Matthew Schettenhelm wrote. Her comments may make it more difficult for the judge “to say a future FTC penalty is likely to rise to a Material Adverse Effect,” a substantial change in circumstances that affects a deal, he said.

Musk is trying to show that what he calls Twitter’s failure to be transparent about the number of bot and spam accounts in its customer base -- along with Zatko’s myriad allegations -- is enough to create an MAE under Delaware law that supports his abandoning the deal.

(Adds details and context throughout, starting in third paragraph.)