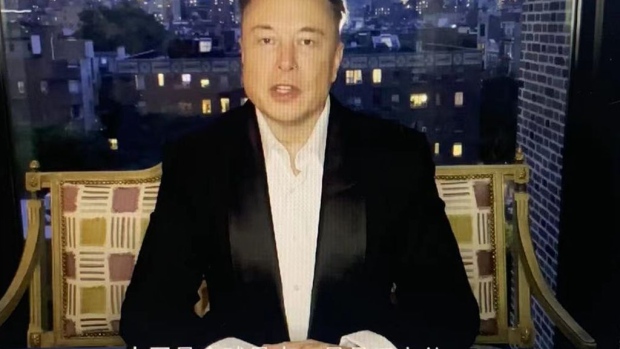 (Bloomberg) -- Elon Musk praised Chinese automakers as “the most competitive in the world” at an online forum Friday, where the Tesla Inc. chief also touched upon data security and China’s “great potential” as a market for electric vehicles.

Musk was in flattery mode in his pre-recorded appearance at the World New Energy Vehicle Congress, taking place in the southern Chinese island of Hainan. China is the world’s biggest EV market and therefore of critical importance to Tesla, particularly after a rocky few months that dented its reputation in the country.

“I have a great deal of respect for the many Chinese automakers” for driving EV technologies, Musk said during a spiel that barely lasted three minutes, noting that the country’s carmakers are particularly strong on software. “Public sentiment and support for electric vehicles is at never seen inflection point because they know it is the future.”

After initially enjoying a red-carpet welcome in the country, including being the only foreign automaker allowed to wholly own its local operations, Tesla has endured a series of setbacks this year. A protest by a disgruntled owner at the Shanghai auto show in April went viral on social media and was followed by a spate of crashes and regulatory scrutiny of safety and customer service issues.

Tesla last month temporarily halted some operations at its factory in Shanghai as the global shortage of semiconductors hit the electric-car maker in one of its most important markets, Bloomberg News reported. Part of a production line at the China plant was halted for about four days in August because of a lack of key chips.

Musk also spoke about data security during his appearance Friday, saying it is the cornerstone of the industry as it develops.

“Tesla will work with national authorities in all countries to ensure data security of intelligence and connected vehicles,” he said. “With the rapid growth of autonomous driving technologies, data security of vehicles is drawing more public concern than ever before.”

Earlier this year, Beijing requested that Tesla store all data gathered by its cars locally, after the vehicles were banned from entering military compounds and some government areas on concerns their cameras could be used for spying.

The EV pioneer soon pledged to abide by the request and set up data centers in the nation. Tesla last month posted job ads for positions including data privacy lawyer and external relations managers earlier this week.