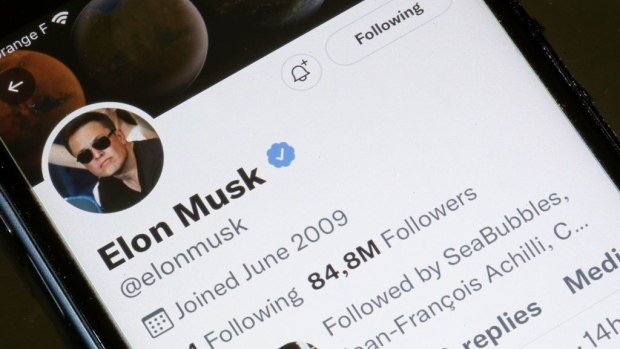 (Bloomberg) -- The world’s richest person Elon Musk has taken his concern about Twitter Inc. to the social media site again.

Responding to a thread initiated by another user, Musk said the deal to buy the company “should proceed on original terms” if Twitter would provide their method for sampling accounts and confirm them to be genuine. “However, if it turns out that their SEC filings are materially false, then it should not,” he also said.

Musk questioned the US Securities and Exchange Commission for not investigating Twitter over its account data and also challenged Twitter Chief Executive Officer Parag Agrawal to a public debate over the number of so-called bots on the platform.

Twitter is currently suing Musk over the canceled $44 billion buyout. Musk has argued that Twitter checks only 100 accounts a day when trying to calculate the number of spam bots on the service.

Musk has accused Twitter of misrepresenting the size of its user base to distort its value and cited the issue of fake accounts as a main reason for abandoning his offer to buy the company. Twitter responded by saying that the idea that Musk, backed by a team of lawyers and financial advisers, was “hoodwinked” into signing the purchase agreement was “as implausible and contrary to fact as it sounds.”

Musk’s arguments for abandoning the deal were revealed in counterclaims filed under seal in a Delaware court last week. Musk is asking the judge to declare Twitter in breach of contract.

Musk originally agreed to pay $54.2 per Twitter share. The company’s stock has plunged along with other technology stocks since then and now trades at $42.52 a share.

(Updates with Musk’s comment on a public debate in third paragraph.)