There is no downside for Elon Musk talking, promoting Dogecoin: Bruce Croxon

VIDEO SIGN OUT
Stocks exposed to cryptocurrencies slumped around the world after Elon Musk voiced concerns over Bitcoin’s energy usage, delivering a blow to the digital asset’s standing within global markets just a few months after the billionaire CEO of Tesla Inc. became one of its biggest supporters.

Crypto shares from the U.S. to Asia slid as Bitcoin plunged as much as 15 per cent, sinking to a low of US$46,045 before trimming the decline. Musk said he was worried over the “rapidly increasing” use of fossil fuels for Bitcoin mining and transactions, and suspended Tesla purchases with the asset, indicating he might favor other cryptocurrencies that don’t use as much energy.

Digital asset technology company Marathon Digital Holdings Inc. fell 14 per cent to the lowest since Jan. 27, as peer Riot Blockchain Inc. tumbled 16 per cent, while Microstrategy Inc., which has put billions of dollars into Bitcoin, sank 9.9 per cent Thursday. Coinbase Global Inc., which runs the largest U.S. cryptocurrency exchange, dropped as much as 6.5 per cent in late trading after quarterly results, adding to its largest ever decline on Thursday.

A “shocker from Musk,” Daniel Ives, an analyst at Wedbush Securities, wrote in a note to clients. “The nature of Bitcoin mining has not changed in the last three months, which speaks to why backtracking on the crypto transaction three months later is a very surprising and confusing move to both Tesla and crypto investors.” 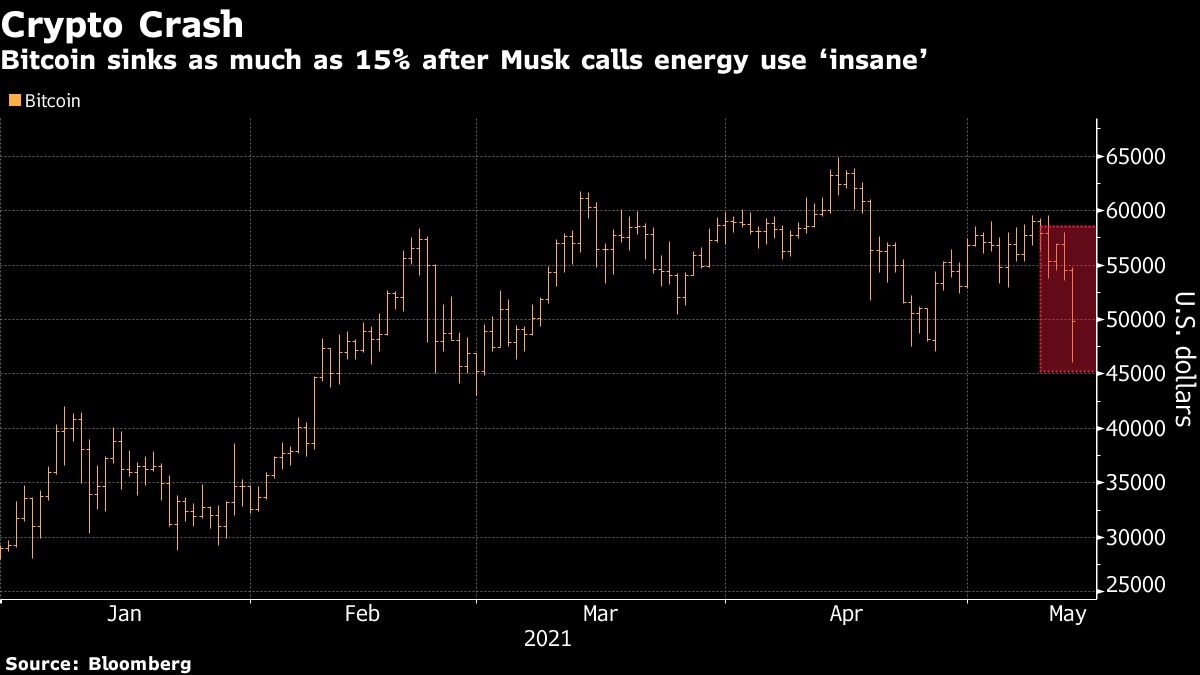 Worries deepened after a Bloomberg News report that Binance Holdings Ltd. is under investigation by the Justice Department and Internal Revenue Service. Officials who probe money laundering and tax offenses have sought information from individuals with insight into Binance’s business, according to people with knowledge of the matter

Tesla announced in February that it had invested US$1.5 billion in Bitcoin and signaled an intent to begin accepting the cryptocurrency as a form of payment.

In Asia, Monex Group Inc., whose ownership of crypto exchange Coincheck Inc. had made it the second-best performing stock in Japan in 2021, dropped 11 per cent. Nexon Co., which just last month became the first Japanese firm to make a significant bet with a US$100 million purchase of the cryptocurrency, slumped 14 per cent, the most since August 2019, though a poor growth outlook given at its earnings also weighed on sentiment.

Tesla’s own shares fell 3.1 per cent, its eighth decline in nine days, adding to a roughly 30 per cent slide since the company announced the Bitcoin investment in February. After last year’s huge rally, the stock has suffered from lofty trader expectations despite posting a record quarterly profit last month. It’s also been among the stocks hit by this week’s selling in tech equities, with concerns around rising inflation fueling fears of higher interest rates.

“Not accepting Bitcoin does not change the thesis or growth trajectory for the electric vehicle story, however it does add to the noise and volatility around the name at a time in which risk assets are under enormous selling pressure,” added Wedbush’s Ives.

Musk said in his post that Tesla wouldn’t be selling any Bitcoin and aimed to use it for transactions once mining shifted to a more sustainable energy. “We believe it has a promising future,” he wrote, “but this cannot come at great cost to the environment.”

That puts Musk at odds with ARK Investment Management LLC’s Cathie Wood, who last month shared research that she said would “debunk the myth that Bitcoin mining” is bad for the environment. Wood’s Ark Innovation ETF, which has been having a miserable month and has Coinbase as its ninth-largest holding, rose 2.2 per cent after closing at the lowest level since November on Wednesday.

Musk started tweeting again on Thursday calling for carbon tax while renewing his faith in cryptocurrencies.

It is high time there was a carbon tax!

To be clear, I strongly believe in crypto, but it can’t drive a massive increase in fossil fuel use, especially coal