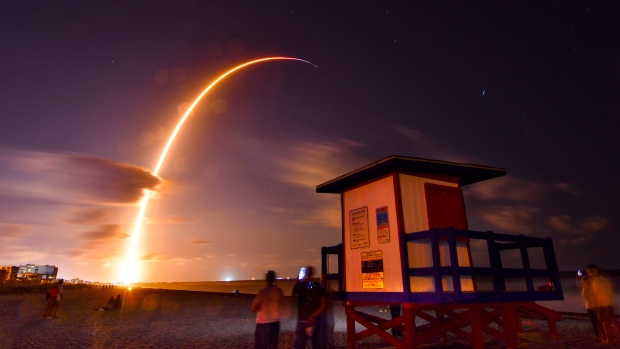 In this May 23, 2019, file photo, a Falcon 9 SpaceX rocket, with a payload of 60 satellites for SpaceX's Starlink broadband network, lifts off from Space Launch Complex 40 at Florida's Cape Canaveral Air Force Station, seen from Cocoa Beach, Fla. Florida Today via AP/Malcolm Denemark

One of SpaceX’s Falcon 9 rockets rumbled aloft at 9:56 a.m. local time from Cape Canaveral Air Force Station in Florida. The satellites are scheduled to begin deploying about an hour after the launch.

A space-based internet service will be an important source of funding for the closely held company, Musk has said. He founded SpaceX in 2002 with the ultimate goal of enabling people to live on other planets. SpaceX launched its first batch of satellites in May and has tinkered with the design to increase spectrum capacity.

SpaceX plans to continue launching Starlink satellites in batches and says it’s targeting service to parts of the northern U.S. and Canada in 2020, according to Starlink’s website.

“We see this as a way for SpaceX to generate revenue that can be used to develop more advanced rockets and spaceships,” Musk told journalists during a conference call in May. “This is a key stepping stone on the way toward establishing a self-sustaining city on Mars and a base on the moon.”