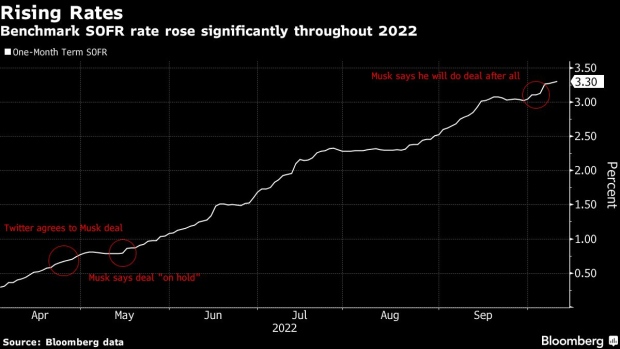 (Bloomberg) -- If Elon Musk really does go through with his acquisition of Twitter Inc., the social media giant will face an annual interest burden of nearly $1.2 billion on its debt - a problem that’s only going to get worse as rates continue to rise.

Roughly half of the $13 billion debt Musk is loading on Twitter is floating rate, meaning interest costs will increase as the Federal Reserve continues to raise rates. The Fed is expected to hike rates again next month, possibly by as much as 75 basis points in a fight to tame inflation.

Twitter now faces an annual interest burden of nearly $1.2 billion, up from an estimated $900 million in May, said Jordan Chalfin, a senior analyst at credit research firm CreditSights.

That’s because the $6.5 billion loan portion of the financing, which banks may have to fund themselves, is structured as a margin over a benchmark rate that changes over time. In addition, Twitter is unlikely to be able to sell debt to investors below the maximum interest rates banks had promised because credit markets have deteriorated so much since the deal was inked, Chalfin added.

Musk is taking a page from the usual private equity playbook by saddling Twitter with debt to help fund his acquisition of the company. Private equity firms usually then aggressively cut costs to increase earnings.

The higher interest burden means Twitter has an even smaller margin for error, Chalfin said. “The goal for Twitter is to increase revenues and expand margins so that they can grow into their capital structure,” he said.

A representative for Morgan Stanley, which is the lead bank on the debt commitments, declined to comment. Representatives for Twitter and Musk did not respond to requests for comment.

The leveraged loan’s coupon is based off of the Secured Overnight Financing Rate, and if banks fund the debt it would be at an interest rate of 4.75% over SOFR, according to an April SEC filing.

The one-month term version of this benchmark, which is commonly used in corporate lending, has increased by nearly 3 percentage points since Musk announced the acquisition in April, and is closely related to the Fed’s interest rate.

Musk’s buyout also includes $6 billion of junk bonds, split equally between secured and unsecured tranches, and would typically be fixed rate once sold to investors. The banks already promised Twitter maximum interest rates on this debt, and the most the unsecured tranche can cost is a coupon of about 11.75%, Bloomberg reported.

The seven banks that committed to provide the debt package in April likely won’t have time to try to sell the bonds and loans to outside investors like they normally would if the deal closes by Oct. 28. They are are also providing $500 million of a type of floating-rate loan called a revolving credit facility that the banks would typically plan to hold themselves, and it’s unknown if that would be drawn or undrawn when the deal closes.

Twitter is expected to burn cash going forward, and might not become free cash flow positive until 2025, Chalfin estimates. “Given significant cash flow burn and high leverage, this is going to be a challenging deal to go out and syndicate to the market,” he said.

Assuming the deal closes and banks fund the debt, they will likely wait for credit markets to calm and then try to sell the loans and bonds to investors. But potential buyers will have to consider not only the cash burn, but also Musk’s numerous criticisms of Twitter. He spent months trying to get out of the deal and lambasted the social media company over a bot problem and a whistleblower.

On the other hand, Musk is the ultimate backstop. The billionaire and a handful of backers are providing $33.5 billion of equity to fund the rest of the acquisition, and he will likely want to protect this massive investment.

“There’s a much longer leash for a privatization by a key man than there would be if it was just a traditional financial sponsor,” said Bloomberg Intelligence analyst Robert Schiffman. “If more capital needs to be put into Twitter, Musk can be their bank.”