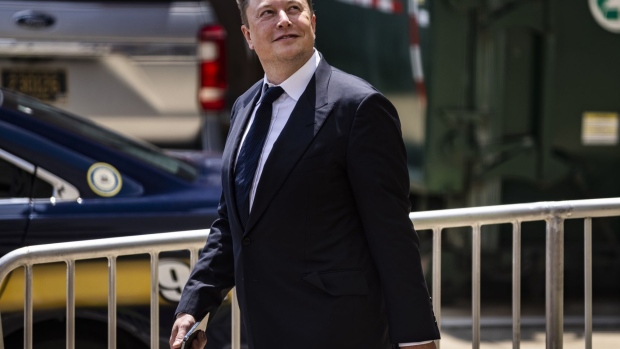 Elon Musk, chief executive officer of Tesla Inc., departs court during the SolarCity trial in Wilmington, Delaware, U.S., on Tuesday, July 13, 2021. Musk was cool but combative as he testified in a Delaware courtroom thatTesla's more than $2 billion acquisition of SolarCity in 2016 wasn't a bailout of the struggling solar provider. , Bloomberg

(Bloomberg) -- Elon Musk asked his more than 95 million Twitter followers whether they trusted billionaires or politicians less, in his latest poll on the social media site. By a wide margin, his social media respondents so far say they back the rich more than the elected.

In early voting with 22 hours remaining, 78.8% of respondents voted politicians as less trustworthy than billionaires from about 654,000 votes as of 9pm Eastern time. Musk, the world’s richest person, said that the use of the word billionaire as a pejorative was “morally wrong & dumb” if a person was a billionaire for building products that make millions of people happy.

He later dared Representative Alexandria Ocasio-Cortez, the New York Democrat who has sparred with Musk on Twitter, to run the same poll with her own followers.

Last month, Musk made a $44 billion offer to buy Twitter. Weeks before the offer, Musk asked users in a Twitter poll if they wanted an edit button. In 2021, he polled Twitter users on whether he should sell a 10% stake in Tesla, which a majority supported.