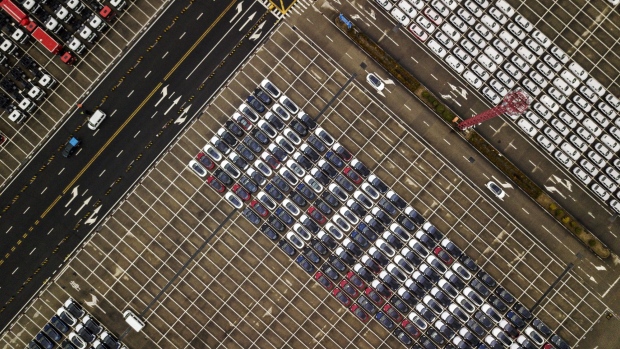 (Bloomberg) -- A double-whammy of a global shortage of chips and ships is the only thing standing in the way of Tesla Inc. maintaining sales growth in excess of 50%, according to Chief Executive Officer Elon Musk.

“We’ve had a fantastic year, we had record vehicle deliveries,” Musk told Tesla’s annual shareholder meeting in Austin, Texas on Thursday. “It looks like we have a good chance of maintaining that. Basically, if we can get the chips we can do it. Hopefully this chip shortage will alleviate soon but I feel confident of being able to maintain something like at least above 50% for quite a while.”

While the chip shortage has dominated auto-industry headlines this year, Musk said the electric-car pioneer was grappling with “lots” of supply chain challenges.

“One of the biggest challenges we had in Q3 was can we get enough ships,” he said. “There was a huge ship shortage.”

Read more: The Wait for Semiconductors Turns Ominous for Automakers

The chip shortage doesn’t appear to be slowing Tesla down just yet. The company earlier this week reported record deliveries of 241,300 cars worldwide in the third quarter, beating the previous high of 201,250 vehicles in the second quarter.

Tesla’s numbers compare favorably with the rest of the auto industry, which saw U.S. vehicle sales slump in the latest three-month period due to limits on production from supply-chain shortages. General Motors Co. took the biggest blow, with sales in its home market dropping by a third in the latest quarter.

Musk said the “significant cost pressure” in the supply chain had forced Tesla to increase car prices, at least temporarily.

“The sheer amount of money we’re spending on flying parts around the world isn’t great,” he said.

And it may be at least 12 months before things start to improve. “We should be through our severe supply chain shortages in ‘23,” he said. “I’m optimistic that will be the case.”