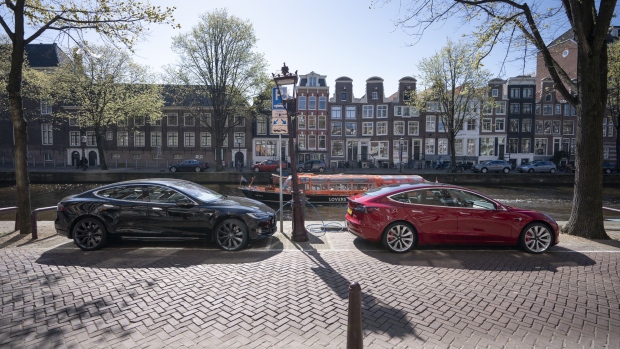 A Tesla Inc. Model 3, right, and a Model S electric automobile recharge at a charging station beside a canal in Amsterdam, Netherlands, on Monday, April 1, 2019. With 5,315 new cars registered, Tesla’s Model 3 accounted for 29 percent of the new sales. , Bloomberg

Tesla Inc. (TSLA.O) Chief Executive Officer Elon Musk said he expects to grow the fleet of Tesla vehicles by 60-80 per cent this year, after doubling it last year.

“It’s hard to be profitable with that level of growth,” Musk said at the company’s annual shareholder meeting in Mountain View, California. “We could slow it down, but then that would not be good for sustainability and the cause of electric vehicles.’’

Musk said he does expect the company to be cash-flow positive.