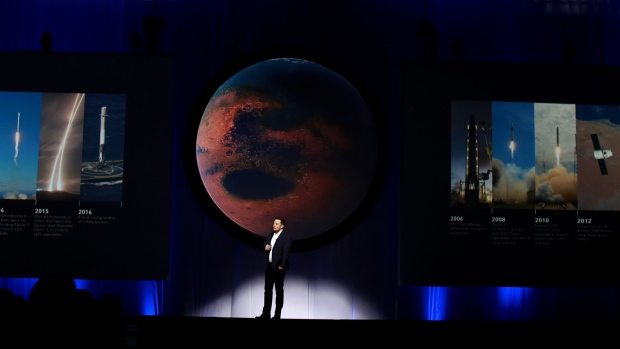 (Bloomberg) -- The world’s richest person Elon Musk said he plans to use his money to “get humanity to Mars and preserve the light of consciousness” as Democrats weigh a ‘billionaire’s tax’ for the wealthiest Americans that could hit him hardest of all.

The Tesla CEO was responding to a tweet by Washington Post reporter Christian Davenport, who said that Musk and Amazon founder Jeff Bezo’s tax bills under the proposed plan -- as much as $50 billion and $44 billion over first five years -- could pay for a mission to Mars.

Musk, who’s net worth reached about $292 billion after a recent surge in Tesla’s share price, has been vocal on Twitter against the billionaire tax. He argued in an earlier tweet that spending is the real problem and that taxing all billionaires at 100% would only make a “small dent” in the U.S. national debt.

In another tweet, Musk said that the unrealized capital gains tax proposal targeted at billionaires could eventually be widened to the middle class.

“Eventually, they run out of other people’s money and then they come for you,” he said.

Democrats are targeting tax increases on the highest earners as among the ways to offset the cost of President Joe Biden’s social-spending bill that could approach $2 trillion and enact many of the party’s long-time goals. Yet they haven’t agreed on how to do it, one of many issues the party is struggling to agree on as talks continue.

The so-called “billionare’s tax” plan from Senator Ron Wyden and others would target a narrow slice of the super-rich -- those with at least $1 billion in assets or incomes of $100 million for three consecutive years -- and force them to pay an annual tax on unrealized gains for publicly traded assets like stocks. House Ways and Means Committee Chair Richard Neal said Wednesday that there isn’t support for the billionaire tax to get it through Congress and that the House is discussing with the Senate instead including a 3% surtax, on top of the top income rate, for those earning more than $10 million a year.