The billionaire head of Tesla Inc. said his space exploration company also owns the digital token -- and has no plans to sell it.

Speaking at “The B Word” conference hosted by the Crypto Council for Innovation, Musk discussed the outlook for Bitcoin with fellow backers Cathie Wood, head of Ark Investment Management, and Jack Dorsey, chief executive officer of Twitter Inc. and Square Inc.

Musk said that he personally owns Bitcoin, Ethereum and Dogecoin, while Tesla and SpaceX both exclusively own Bitcoin. The cryptocurrency climbed as high as US$32,820 during the panel Wednesday before falling to about US$31,683 at 3:49 p.m. New York time.

“I would like to see Bitcoin succeed,” Musk said. “If the price of Bitcoin goes down, I lose money. I might pump but don’t dump.” 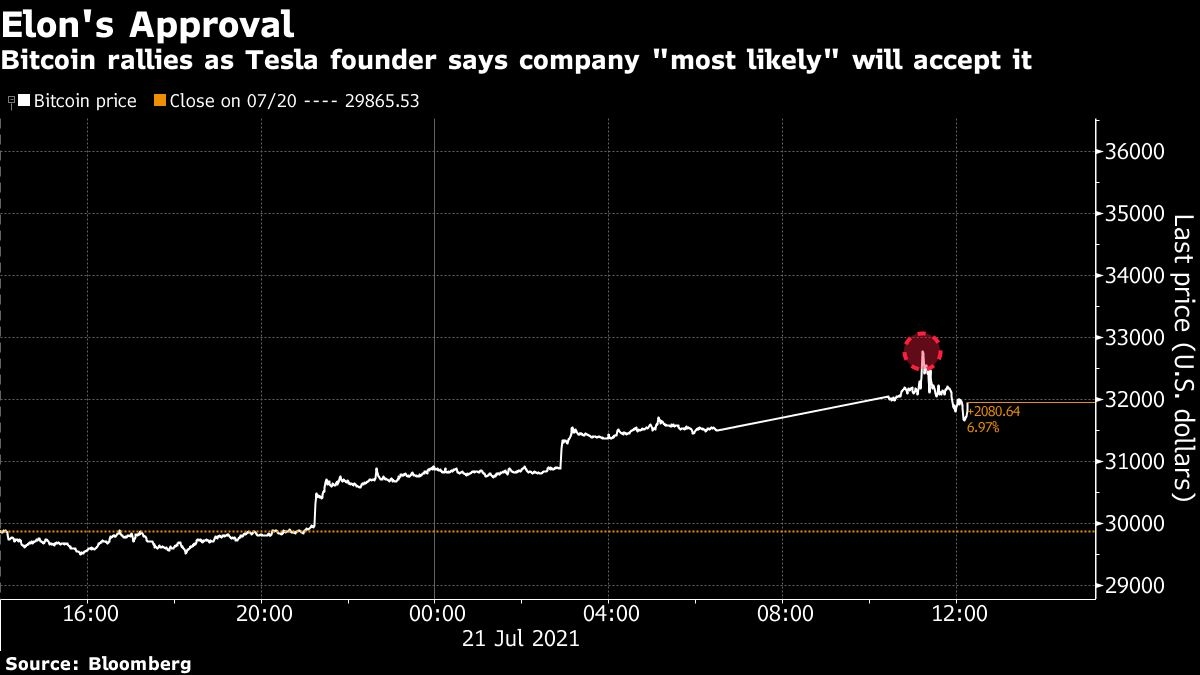 “It looks like Bitcoin is shifting more toward renewables,” Musk said. “I would want to do a little bit more diligence to confirm the percentage of renewable energy usage is at or above 50 per cent.”

Hydroelectric, geothermal and nuclear energy could all be good sources of power for Bitcoin mining, he noted.

Wood said corporations should consider adding Bitcoin to their balance sheets, partly as a hedge against deflation. She added that the Financial Accounting Standards Board should reconsider how it classifies Bitcoin since institutions currently have to write off holdings when the price declines. Listing it as an intangible asset could help remedy that.

“Think about how explosive growth could be,” she said.

Still, MicroStrategy Inc., which reports earnings next week, may illustrate the perils of companies amassing large Bitcoin holdings. The firm has piled into the digital currency in recent months, only to see the token slump roughly 50 per cent since its April peak.

As for Tesla, Musk noted that the company’s bank balances in Europe have negative interest rates, saying it “drives me crazy.”

“We should definitely move that into Bitcoin,” he said.