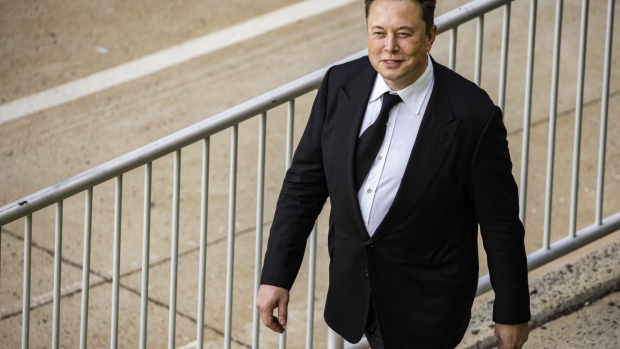 Elon Musk, chief executive officer of Tesla Inc., departs from court for the SolarCity trial in Wilmington, Delaware, U.S., on Monday, July 12, 2021. Musk was cool but combative as he testified in a Delaware courtroom that Tesla Inc.'s more than $2 billion acquisition of SolarCity in 2016 wasn't a bailout of the struggling solar provider. , Bloomberg

(Bloomberg) -- Elon Musk told Twitter Inc. employees on Wednesday that he doesn’t plan to cut 75% of the staff when he takes over the company, according to people familiar with the matter.

Musk, whose $44 billion deal for Twitter is on track to close Friday, denied the previously reported number in an address to employees at the company’s San Francisco office, said the people, who declined to be named because the information isn’t public.

The billionaire is still expected to cut staff as part of the takeover, causing anxiety among workers. Earlier on Thursday, Musk posted a video clip of himself walking into the offices carrying a kitchen sink. He changed his Twitter profile description to read “Chief Twit.”

The social-media company’s workforce now numbers about 7,500, and many employees are greeting the prospect of ownership by Musk with trepidation. The billionaire expects to double revenue within three years, a person familiar with the matter said last week. In recent days, fears have been growing about a major reduction in headcount or another reorganization, another person said.

Musk on Thursday posted a tweet to Twitter advertisers, saying he was buying the company “to try to help humanity, whom I love.” Musk also said that when done right, advertising can “delight, entertain and inform you.” In order for that to be true, he added, Twitter needs to run ads that are relevant to users’ needs.

The deal is expected to close by 5 p.m. New York time Friday, as lawyers and bankers on both sides race to finalize the paperwork. Completing the transaction would mark the culmination of a months-long saga that saw Musk amass a big stake in the company, agree to join its board before changing his mind and then embark on a hasty quest to take Twitter private. Aside from the debt financing, he also rounded up a who’s who of billionaire buddies and other investors to pony up part of the equity needed, signing the takeover agreement while waiving the right to examine Twitter’s financials.

As markets tumbled and it became clear that he had vastly overpaid, Musk reversed course again, backing out of the deal and alleging that Twitter misled him about the prevalence of fake accounts. After Twitter took him to court in Delaware to force his hand, Musk relented and negotiations resumed.

Musk offered $54.20 a share for the company and his efforts to back out of the transaction sent the shares roughly 40% below the offer price in July. On Tuesday, Bloomberg reported that Musk has told bankers he expected the deal to close by the deadline. Banks were expecting a borrowing notice from Musk for $13 billion in debt financing, with the intention of the funds going into escrow Thursday.