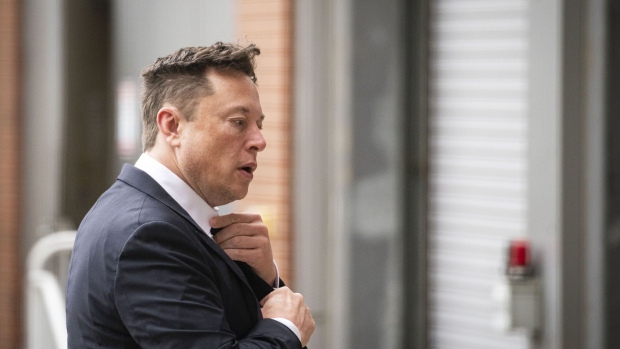 (Bloomberg) -- Tesla Inc. chief executive officer Elon Musk told a judge he shouldn’t be prohibited from talking about his fight with the U.S. Securities and Exchange Commission, as shareholders suing him have requested.

It’s the latest volley in a lawsuit in which shareholders claim Musk’s 2018 tweet about taking the company private manipulated its stock price and defrauded them. Last week, the investors won a key ruling in the run-up to a San Francisco fraud trial set for January with billions of dollars in damages at stake.

After Musk publicly complained at a TED talk that he was “unlawfully” forced to settle a 2018 SEC suit over the same tweet, the investors said his commentary threatens to “taint” the jury that will eventually decide whether the world’s richest person committed fraud.

The shareholders urged U.S. District Judge Edward M. Chen to prohibit Musk from making any more public comments about his “interpretation and opinions” of the claims in their lawsuit until after the trial is finished.

The investors “ask this court to trample on Elon Musk’s First Amendment rights by barring him from publicly discussing this case or its underlying facts,” lawyers for Musk and Tesla said in Wednesday’s filing. That request “cannot be reconciled with the Constitution’s guarantee of free speech and should be denied.”

Musk has argued that the August 2018 tweet that was he considering taking Tesla private with “funding secured” was truthful. But Chen concluded after reviewing the evidence that it was false.

(Updates with excerpt from court filing.)