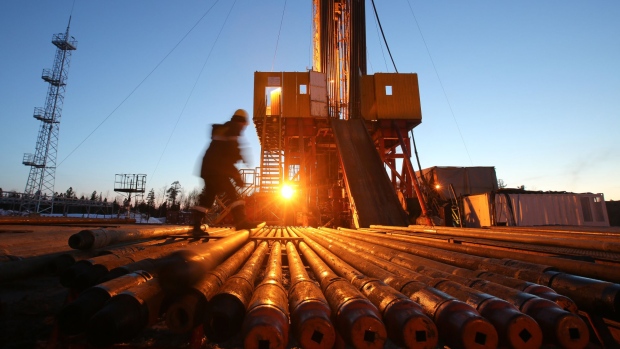 A worker passes an illuminated oil drilling rig, operated by Rosneft PJSC, in the Samotlor oilfield near Nizhnevartovsk, Russia, on Tuesday, March 21, 2017. Russia's largest oil field, so far past its prime that it now pumps almost 20 times more water than crude, could be on the verge of gushing profits again for Rosneft PJSC. Photographer: Andrey Rudakov/Bloomberg , Bloomberg

(Bloomberg) -- Myanmar is set to join a growing list of developing countries that are warming up to Russia oil imports amid growing shortages across some of the most impoverished parts of Asia.

The military-led government bought Russian fuel oil and the cargoes will arrive in phases from September, said junta chief Min Aung Hlaing this week. Ties between the two countries have strengthened on the back of a defense partnership, with Russia supplying arms, ammunition and training to Myanmar.

“We discussed buying and distributing fuel oil from Russia months before our head of state’s visit to Russia in July,” junta spokesman Zaw Min Tun said on Wednesday in a press briefing. “During his visit, the deal was successfully done. We aim to buy high-quality fuel oil at a cheap price from the country where we can get it quickly.”

Shunned shipments of Russian oil, gas and coal have made their way to countries such as Sri Lanka and Pakistan, where soaring fiscal deficits are weighing on local currencies. Some suppliers have stopped offering to poorer nations on concerns over their ability to pay, even as marketers of Russian barrels continue to court these buyers. Shipments from Russia tend to be cheaper than other supplies after western buyers stopped direct purchases due to sanctions and restrictions.

Myanmar will directly import oil and petroleum products from Russia at a reasonable price for nationwide distribution, said Min Min, permanent secretary at the country’s commerce ministry who’s also part of a 10-member committee set up for the purchase, storage and distribution of Russian oil.

It remains unclear how fuels from Russia will be transported to Myanmar. The two countries have previously considered supplying Russian energy via a pipeline through India or China, according to a media report.

The committee held a meeting this month but has yet pin down details on the number of cargoes, cost and arrival dates of Russian oil into Myanmar, Min Min said by phone.

The official didn’t reveal which entities will be involved in importing the fuel, but an order by the State Administration Council showed that representatives from four private companies -- Star High, Brighter Energy, Best Oil, and Yetagun Energy Trading -- are members of the committee. A media report said a son of the junta chief and partners were coming together for a similar purpose.

Russia is among a handful of countries that have strengthened ties with Myanmar after the 2021 coup. Earlier this year, the regime began talks with Moscow for fuel shipments following power outages, and as global firms including TotalEnergies SE and Chevron Corp began distancing themselves from the regime.