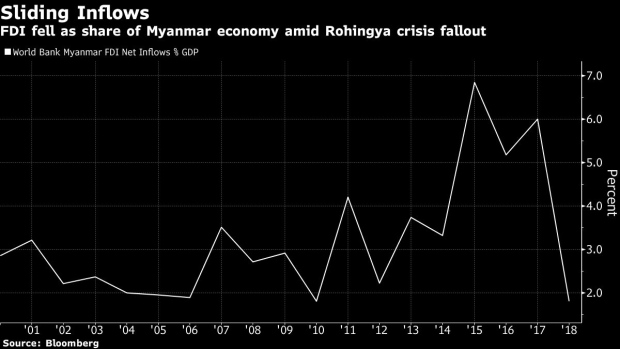 The Southeast Asian nation, whose goal is to woo a total of $5.8 billion in foreign-direct investment this year, is trying to cut back the red tape that deters some companies, according to a senior government official.

“When it comes to relocation, Vietnam might be preferable, but it’s already congested,” said Aung Naing Oo, permanent secretary at the Ministry of Investment and Foreign Economic Relations. “So, investors are now eyeing Indonesia and Myanmar.”

One advantage for Myanmar -- where about a third of the population lives in poverty -- is that Europe and the U.S. offer preferential export terms to boost growth, according to Aung Naing Oo. At the same time, the $71 billion economy continues to face traditional obstacles such as insufficient supplies of electricity and industrial land.

Recent evidence suggests Vietnam has pulled ahead in the race to lure producers, but neighbors including Thailand and Indonesia are stepping up efforts to attract them.

Clogged infrastructure is one of the risks for Vietnam, where shipping container capacity will need to grow at almost twice its 10%-12% pace of the past decade to keep up with new demand, Bloomberg Intelligence research shows.

The Rohingya refugee crisis flared up in Rakhine state in the second half of 2017, with the U.S. and the United Nations describing Myanmar’s treatment of Rohingya Muslims as “ethnic cleansing.”

As Western partners balked in the wake of the tumult, Myanmar increasingly embraced Chinese money. But China is also a long-term backer: in records going back to 1988, Singapore accounts for 27% of foreign investment, followed by China on 25% and Thailand on 14%.

Chinese companies have to show commitment to sustainable practices to counter negative public perceptions about their conduct, according to Aung Naing Oo.

“They must prove that they are responsible businesses,” he said in the interview on Nov. 8.

The World Bank has said that production relocation sparked by the U.S.-China trade war is an opportunity for Myanmar.

The lender expects the country’s economic expansion to climb toward 7% by 2022, even as domestic conflicts -- including in Rakhine -- remain downside risks because of their potential impact on investor sentiment.

To contact the reporter on this story: Khine Lin Kyaw in Yangon at kkyaw1@bloomberg.net

To contact the editors responsible for this story: Sunil Jagtiani at sjagtiani@bloomberg.net, Shamim Adam