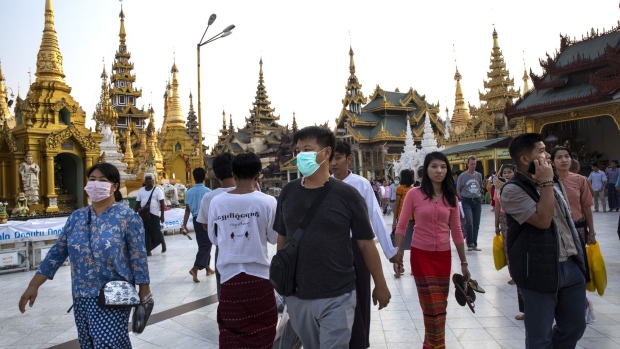 YANGON - MARCH 02 : Tourists wear masks visiting the Shwedagon pagoda in Yangon, Myanmar on March 02, 2020. With little information about cases in some South East Asian countries health experts are worried that the infection could be spreading undetected throughout much of th region. The virus called COVID-19, has infected approximately 90,000 and killed more than 3,000, mostly in mainland China. (Photo by Paula Bronstein/Getty Images ) , Photographer: Paula Bronstein/Getty Images AsiaPac

(Bloomberg) -- Myanmar is finalizing procedures for reopening its tourism sector to foreigners early next year and will initially target visitors from Southeast Asia, according to Union Minister for Hotels and Tourism Htay Aung.

The effort comes as new Covid-19 infections decelerate in the nation of 55 million, which has prompted the lifting of a ban on inter-provincial travel. The easing and traditional holidays have already spurred some locals to go on vacation, Htay Aung said.

“We are preparing for necessary arrangements for travel bubbles with Thailand so that we will be ready when they reach out to us through an official channel,” he said in an interview. “We also aim at reopening to Cambodia, Laos, Vietnam in the first quarter of 2022.”

The goal is to open so Thais can safely visit popular tourist destinations in and around Kawthoung, Myeik, Dawei, Tachileik and Kyaington, he said. Myanmar borders five countries -- Thailand, China, India, Bangladesh and Laos -- and still has a ban on international commercial flights.

Thailand last week unveiled its plans to drop quarantines for fully vaccinated visitors from some countries starting Nov. 1 to kick-start its own tourism industry.

About 300,000 foreigners are expected in the first phase of the reopening, Htay Aung said. Although half of the country’s hotels and guest houses have suspended operations, some 90,000 rooms are still available, he said.

Myanmar has had a military government since a February coup that ousted a civilian administration led by Aung San Suu Kyi. The political turmoil added to struggles with the pandemic and its fallout.

The economy probably contracted 18.4% in the fiscal year ended Sept. 30, according to the latest report by the Asian Development Bank, which didn’t provide a forecast for fiscal 2022 due to “uncertain situation.”

Tourism contributed about 6% of Myanmar’s gross domestic product in 2019 before the pandemic, according to the World Travel & Tourism Council.

“The potential is there but it will take years to return to the level we reached before the pandemic,” Htay Aung said.